Piccadilly at Janakpuri district centre, Taj Vivanta in Dwarka, Pride Plaza in Aerocity have been delinked 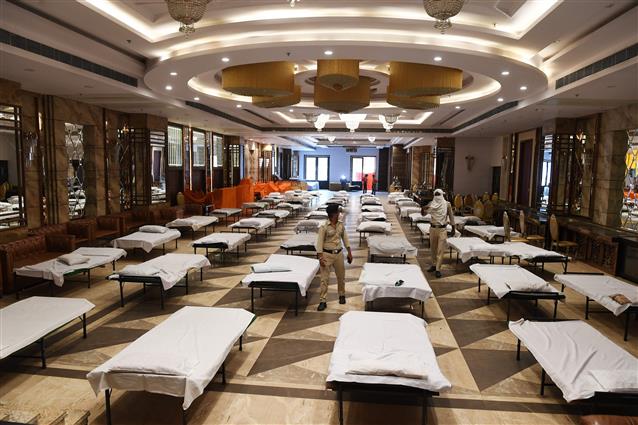 In this file photo taken on June 16, 2020, a man walks past beds inside a banquet hall used for weddings after it was temporarily converted into a makeshift quarantine facility for patients diagnosed with COVID-19, in New Delhi. REUTERS

District authorities in South West Delhi have delinked three hotels from the hospitals they were attached to serve as COVID-19 care facilities due to low-occupancy, and some other districts may follow suit, officials have said.

Four hotels — Piccadilly at Janakpuri district centre, Taj Vivanta in Dwarka, Pride Plaza in Aerocity and Welcome in Dwarka Sector 10 — were attached to hospitals closest to them, in mid-June, to serve as facilities for COVID-19 patients with moderate symptoms.

However, only 25 of the total 900 rooms of the four hotels were occupied over the past fortnight, the officials said.

In an order issued on Saturday, SDM (Dwarka) said Piccadilly, Pride Plaza and Taj Vivanta have been delinked from the hospitals they were attached to.

It also mentioned that the hotels claimed they were incurring huge expenses in keeping all the rooms ready for patients even though the occupancy was low.

“We followed the government orders and did what was asked of us when the hotel was linked to the COVID-19 hospitals as an extended facility. Our hotel was also used for quarantine facility when repatriation flights arrived, and lots of people stayed here,” said a representative of one of the delinked hotels, requesting not to be named.

“But, occupancy was poor as we were linked to COVID care hospital. We don’t know what was the reason for the low-occupancy. It could be due to people getting admission in hospitals itself,” he said.

The manager of another delinked hotel said there were “almost no COVID-19 patients” at the hotel.

“The decision to delink has come as a big relief,” he said.

“We incur a high maintenance cost on this property. Also, the room charges fixed for COVID-19 patients were just around 70 per cent of the normal charges for a room. So, we were dealing with a situation of low occupancy and lower charges, coupled with high maintenance cost. Naturally, the delinking decision is a huge relief,” he said.

The Delhi government had in early June empowered the district magistrates in 11 districts to use hotels as an extension of hospitals treating COVID-19 patients as the cases surged.

A total of 40 hotels were designated as an extension of various hospitals across the city.

The patients staying there received basic healthcare and were to be shifted to the attached hospitals in case their condition worsened.

Authorities in some other districts have also sought permission from the government to delink the hotels designated as extended facilities for COVID-19 patients, in view of low-occupancy. PTI