Treated as celebrities, viewed with suspicion, DTC's women drivers have seen it all : The Tribune India

Treated as celebrities, viewed with suspicion, DTC's women drivers have seen it all

'Passengers take selfies and videos with me. I feel like a celebrity’, said a woman driver 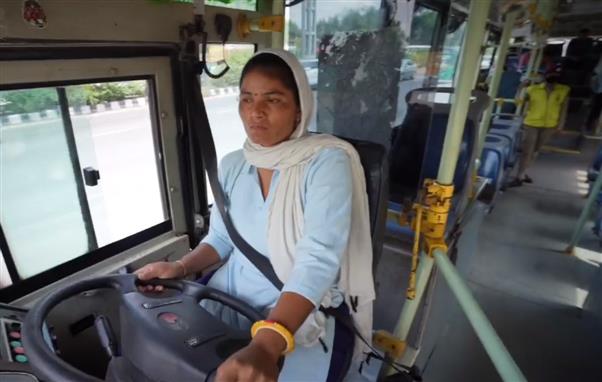 It has been almost a month since women bus drivers are driving on Delhi's roads and they say that from being treated as celebrities to being observed with a hint of doubt, they have seen it all.

Komal (23), one of the 11 women bus drivers who were handed appointment letters last month, said she is treated like a celebrity.

Komal said the on-road experience of driving a bus is entirely different from what they had experienced during the training period.

"While we were being trained, we did not have to stop at the bus stops or navigate through difficult roads carrying passengers. It is a different experience altogether," she told PTI.

Santosh Kumari, a 40-year-old mother of a Class-12 student, said apart from riding a bicycle as a child, she had never driven a vehicle.

"Now, I am riding a bus. From people viewing us with suspicion to some appreciating my driving skills, I have seen it all from the day I started driving on Delhi roads. I have been driving on the Karnal Bypass bus route.

"It has happened that if the bus shook while navigating a difficult turn, people said, 'This is happening because a woman is driving!' while there have also been some who said they had an extremely smooth ride," she said.

Santosh Kumari said during the training period, they were not required to drive for long durations but now that they are on the road for long hours, finding public facilities becomes difficult on certain routes.

"There are some routes where it is difficult to find washrooms and we sometimes use the washrooms at petrol pumps. There is also a problem of cleanliness at such facilities so we often wait till we reach the bus depots," she added.

The Twitter handle of the Delhi transport department had recently shared the story of Sharmila, another bus driver.

"Meet Sharmila. Till a few years ago, she did not even know how to ride a cycle but today, she is driving DTC buses after being trained by the Delhi government," it said.

In a video uploaded on the handle, Sharmila is heard saying people have been lauding her driving skills.

"My daughter finds it difficult to stay without me but my mother-in-law said she will take care of her. My daughter still calls me asking when will I return home. There are people who say women cannot do anything apart from cooking but I tell them, 'Come with me and sit in my bus'," she says in the video.