According to Vishwa Hindu Parishad spokesperson, around 15 to 20 workers and leaders, were detained during the protest at Chandni Chowk 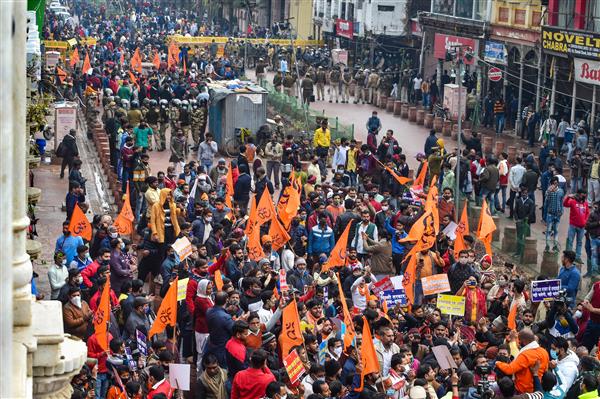 Vishva Hindu Parishad supporters take part in a protest at Chandni Chowk after a 100-year-old temple of Lord Hanuman was demolished on court orders, in old Delhi, on Tuesday. PTI Photo

The Vishwa Hindu Parishad (VHP) and the Bajrang Dal members were detained by police during a protest on Tuesday over the demolition of a Hanuman temple at Chandni Chowk in Delhi.

The temple was demolished on Sunday by the North Delhi Municipal Corporation in accordance with court orders as part of the ongoing Chandni Chowk beautification plan.

The protesters, carrying saffron flags and raising slogans, took out a march from the Gauri Shankar Mandir to the site where the temple existed. They were stopped by police at a barricade.

A senior police official said 27 protesters, who gathered near the Gauri Shankar temple on Tuesday, were detained owing to COVID-19 guidelines. They were taken to a nearby police station and released later.

As a precautionary measure, security personnel have been deployed in the area, police said. PTI