5 lakh Indians to benefit as US passes bills providing citizenship to dreamers, farmworkers 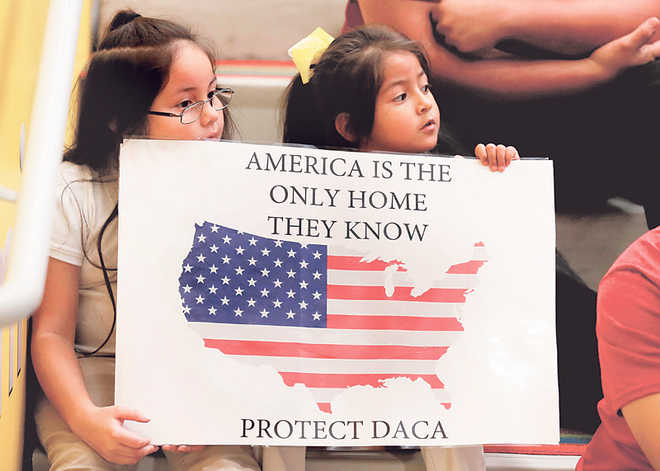 File photo of kids hold a sign in support of DACA, urging people to contact their legislators in Oklahoma City. AP/PTI

The US House of Representatives has passed two key bills that would create a pathway to citizenship for millions of undocumented immigrants, some migrant farmworkers and children whose parents immigrated legally to the country, like those under the H-1B visa programme.

The passage of the American Dream and Promise Act of 2021, by the House on Thursday by 228-197 votes, was welcomed by the President Joe Biden, who described it as a critical first step in reforming the country's immigration system.

It will provide much-needed relief to Temporary Protected Status (TPS) holders and Dreamers, young people who came here as children and know no other country, Biden said.

"I support this bill, and commend the House of Representatives for passing this important legislation," Biden said in a statement.

Among others, the bill also provide relief for “legal dreamers,” the foreign-born children of many non-immigrant workers, including those on H-1B, who lose their legal status once they reach 21 years of age, which would allow many other promising young people to pursue their version of the “American Dream.”

The H-1B visa, the most sought after among Indian IT professionals, is a non-immigrant visa that allows US companies to employ foreign workers in specialty occupations that require theoretical or technical expertise. The technology companies depend on it to hire tens of thousands of employees each year from countries such as India and China.

The bill now moves to the Senate, which needs to pass the legislation before it can be signed into law by Biden.

“My administration looks forward to working together with Congress to do the right thing for Dreamers and TPS holders who contribute so much to our country, and to building a 21st century immigration system that is grounded in dignity, safety, and fairness... to create a path to citizenship for the undocumented population in the United States,” Biden said.

The American Dream and Promise Act establishes a path to lawful permanent resident (LPR) status for DACA recipients and for certain individuals who either held or were eligible for TPS or Deferred Enforced Departure (DED).

The majority of these individuals have been in the United States for much of their lives, often with work authorisation and temporary protections against deportation.

“Five years after attaining full LPR status, individuals are then eligible to apply for citizenship, a path that is supported by nearly 75 per cent of the American public...,” Indian American Congressman Ami Bera said.

This legislation is protecting Dreamers and TPS and DED recipients, honours the truth that immigrants are the constant reinvigoration of our country, when they come here with their hopes and dreams and aspirations, House Speaker Nancy Pelosi said.

“These parents bring their children, their hopes and dreams and aspirations for a better future for their children. That courage, that determination, those aspirations are American traits, and they all make America more American with all of that.  Indeed, they are true and legitimate heirs, these Dreamers are, of our Founders,” Pelosi said.

Senate Majority Whip Dick Durbin, Chair of the Senate Judiciary Committee and the original sponsor of the Dream Act, said that a legislative solution is long overdue for Dreamers who have devoted their lives to our country, undocumented migrant farmworkers doing backbreaking agricultural work during this pandemic to keep food on our tables.

“If the Senate is able to join the House in passing these bipartisan bills, we would be able to enact the most significant immigration legislation in more than 30 years.  I hope we seize this moment,” he said.

According to FWD.US, undocumented immigrants are one of the largest groups among the immigrant essential workforce, making up 5.2 million essential workers, of which nearly one million are Dreamers part of the 2019 American Dream and Promise Act who entered the US as children.

The American Dream and Promise Act also provides relief for "legal dreamers," the foreign-born children of many non-immigrant workers, including those on H-1B, who unfortunately lose their legal status when they turn 21.

The Farm Workforce Modernisation Act will allow unauthorised farmworkers to earn legal status in the US and update temporary agricultural worker programs to meet our economy's needs. Most notably, it will provide H-2A eligibility to employers who have year-round labour needs, which is critical for dairy and livestock, it said.

According to New American Economy, more than 500,000 DACA-eligible immigrants are essential workers, including 62,000 in the healthcare industry alone.

Senator Dianne Feinstein said that since Obama created DACA in 2012 to temporarily protect Dreamers, more than 800,000 individuals have registered for the programme. California is home to the most DACA recipients, more than one in four live in our state.

“These young people didn't break the law, many were brought here as babies or small children by their parents. They now go to school, work and pay taxes here in the United States. They are US citizens in all but name,” she said. PTI