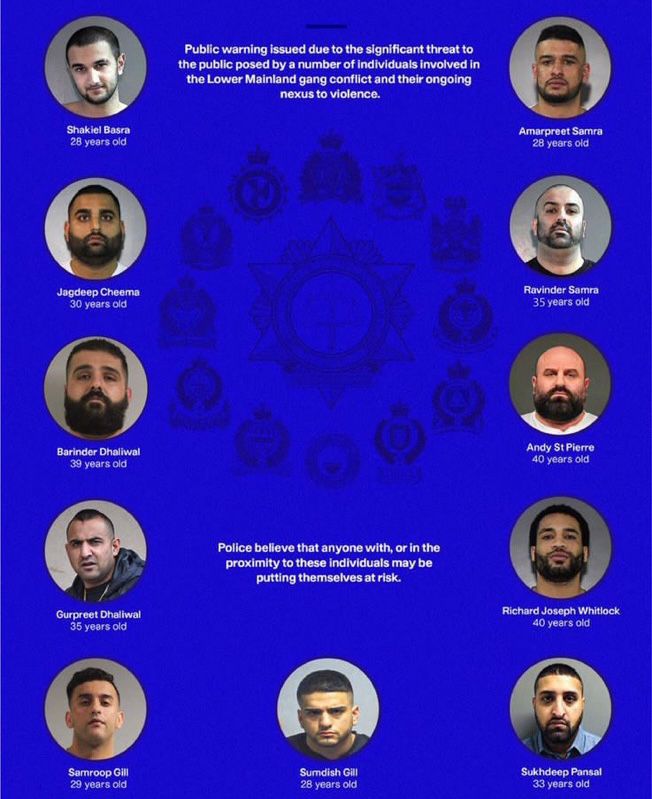 The photos have been tweeted by @cfseubc

The Canada police have issued a rare warning about 11 men linked to extreme levels of gang violence. The police have warned the public to avoid being near them.

Out of the 11 men, nine are of Punjab origin.

A public safety warning has been issuing in partnership with @VancouverPD @BCRCMP identifying 11 individuals who pose a significant threat to public safety due to their ongoing involvement in gang conflicts and connection to extreme levels of violence #endganglife pic.twitter.com/Nt57E3SVmz

The British Columbia police said that they were linked to a slew of killings and shootings in the province. It asked the public to avoid being near them.

"It is highly likely a rival gangster will target them with violence," said CFSEU Asst. Cmdr. Manny Mann, saying the men listed are a risk to their friends and family as well as Sanders.

CTV news said the men are

It added: "Warnings to stay away from specific alleged criminals were once almost unheard-of, but they have been slowly increasing in recent years. This is the second one from the CFSEU in a little more than a year; the last one was prescient." Meninder Dhaliwal, who was on last year’s 11-man list, was gunned down in Whistler late last month in a shooting that had tourists and visitors screaming and running from the violence. Police said his brother, Harpreet, was the man shot dead in Vancouver’s Coal Harbour neighbourhood last year. Another brother, 35-year-old Gurpreet Dhaliwal, is on this year’s list.