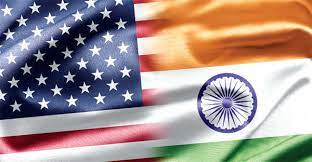 Describing the Indian Ocean region a vitally important part of the Indo-Pacific where the United States has political, economic, and security interests, a US lawmaker on Tuesday introduced a bill in the House of Representatives to strengthen ties with the countries in the region, particularly India, Australia and Japan.

It also seeks to promote cooperation with United States allies in the Indo-Pacific, including Japan and Australia, and major defense partners, including India, and NATO allies, including the United Kingdom and France, to support a rules-based order in such a region. PTI