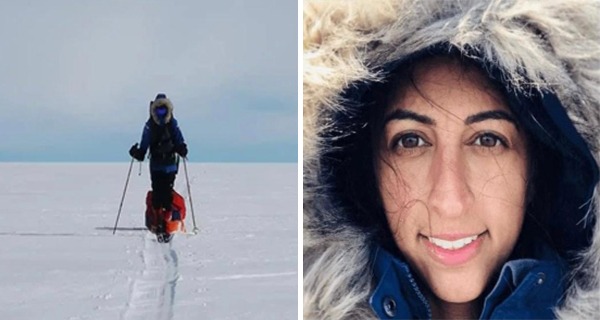 Chandi announced her history-making feat on her live blog on Monday at the end of Day 40 after travelling 700 miles (1,127 kilometres) while pulling a pulk or sledge with all of her kit and battling temperatures of minus 50 degrees Celsius and wind speeds of around 60mph.

“I made it to the South Pole where it's snowing. Feeling so many emotions right now. I knew nothing about the polar world three years ago and it feels so surreal to finally be here. It was tough getting here and I want to thank everybody for their support,” she wrote.

“This expedition was always about so much more than me. I want to encourage people to push their boundaries and to believe in themselves, and I want you to be able to do it without being labelled a rebel. I have been told no on many occasions and told to ‘just do the normal thing', but we create our own normal," Chandi said.

She uploaded a live tracking map of her trek and also posted regular blogs of her journey to the snow-capped region.

“Day 40 – Finished. Preet has just made history becoming the first woman of colour to complete a solo expedition in Antarctica,” reads the final entry of her blog.

"You are capable of anything you want. No matter where you are from or where your start line is, everybody starts somewhere. I don't want to just break the glass ceiling; I want to smash it into a million pieces,” she said.

As part of a Medical Regiment in the northwest of England, Chandi's primary role is to organise and validate training for medics in the Army as Clinical Training Officer.

Currently based in London, she is completing her masters degree in Sports and Exercise Medicine, part-time, at Queen Mary's University in London and had dragged around two large tyres over the past few months for her polar training as a substitute for the heavy sledge she has been dragging along in Antarctica.

“It definitely feels colder in the last degree where I'm at higher altitude. I haven't seen anyone here in the last degree and now I'm 15 nautical miles from the South Pole. I can't believe I'm almost there,” read her entry from Sunday, a day before her milestone.

She also used her time in the cold to think about wedding plans for when she returns to England, having been engaged to Army reservist fiance David Jarman before setting off on her expedition.

The couple are expected to be reunited in Chile when she returns from the South Pole later this month.

“I read somewhere that when you ask people to be your bridesmaids it's nice to do it in a special way, so all the way from Antarctica I would love nothing more than for you to be my bridesmaids. Sonia Chandi, Rachel Tucker-Norton, Kamal Dhamrait, Tig Bridge, Hannah Sawford (or Hannah Smith now) and Collette Davey,” Chandi wrote.

“I love you all and would love you to be my bridesmaids. I think at least three hen do's are required. That's normal right? But even if it's not normal that's never been anything to stop me,” she added.

Chandi says she has always been keen to push the human body to its limits and sees her latest mission as part of this wider research.

As an "endurance athlete", she has run marathons and ultra-marathons and, as an Army officer, completed large-scale exercises and deployments in Nepal, Kenya and most recently a six-month United Nations peacekeeping tour to South Sudan.

“Anything ambitious can feel out of reach at the beginning but every bit of training I complete brings me closer to my goal. My training expeditions in Greenland and Norway have helped prepare me and my goal is now in reach,” she declared before setting off for the South Pole in November. PTI