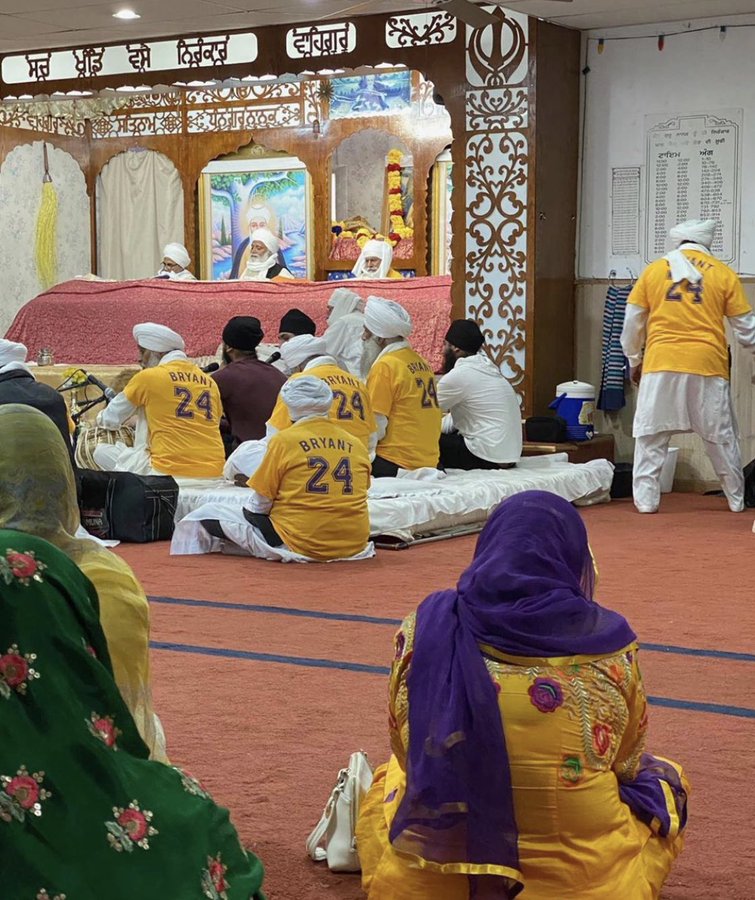 Hundreds of Sikh worshippers turned up wearing the Lakers colours—purple and yellow— at the Gurdwara Nanaksar in Fresno, California, in a special prayer meet for the late basketball great Kobe Bryant who was killed in a helicopter crash last month, a media report said.

While men and children wore Lakers jerseys, many women showed up in the traditional salwar kameez in purple and yellow, The American Bazaar report said earlier this week.

Sikhs praying for Kobe and the victims at the temple 🙏🏽💜💛

This hits home. Kobe Bryant was a household name in every Sikh home. Your grandpa and grandma didn’t know what hoop was, but they knew Kobe. They know how special he was. pic.twitter.com/ot6qEWlKJC

The organizers at the Gurdwara Nanaksar held the prayer meet after it witnessed that many Sikh men and children were affected by the untimely death of the NBA icon, who had inspired them to begin playing basketball.

Some young men from the community showed up at the gurdwara crying.

Amitoj Singh, a student at Terronez Middle School in Fresno, who attended the prayer meeting said: "The gurdwara authorities thought of organizing a 'path' (prayer) for Kobe and others when they saw a young child crying in the gurdwara. While Kobe was hugely popular across the globe, the Sikh Americans keenly followed him."

Angad Sandhu another attendee of the prayer meeting and a Lakers fan told the American Bazaar: "I started playing basketball because of Kobe and his game and conduct really inspired me."

On why Kobe remained such a popular figure particularly among the Sikh American community, Amandeep Singh, an actor and model says: "Kobe in the Sikh community was a brave leader. He led without fear, he conquered his missions with unbelievable determination, passion and commitment.

"He was a hero to the Sikh community, especially to children. He inspired many Sikhs to play basketball and chase their dreams. He inspired us in every way. He was a role model to many." Kobe and his 13-year-old daughter, Gianna, were among the nine people killed in a helicopter crash in Calabasas on January 26.—IANS