Guptas did not capture state, they were just corrupt: South Africa’s Opposition leader

In June, the Interpol had issued red notices against Rajesh, 51, and Atul Gupta, 53, -- two of the three Indian-origin Gupta brothers—who fled South Africa with their families amid investigations into their alleged looting of billions of rands from state-owned enterprises during the presidency of Jacob Zuma 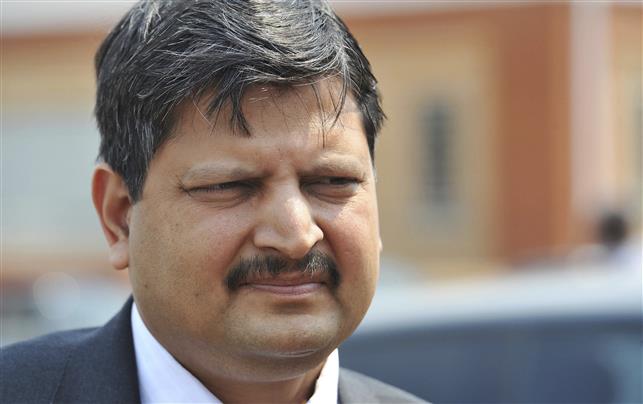 In this September 2010 file photo, Atul Gupta, of the Gupta family, is seen outside magistrate's courts in Johannesburg. AP/PTI file

In June, the Interpol had issued red notices against Rajesh, 51, and Atul Gupta, 53, -- two of the three Indian-origin Gupta brothers—who fled South Africa with their families amid investigations into their alleged looting of billions of rands from state-owned enterprises during the presidency of Jacob Zuma.

On July 25, the South African government submitted a formal request to the UAE government for the extradition of Atul and Rajesh Gupta from Dubai.

The Gupta brothers are accused of using their proximity with Zuma to profit financially and influence senior appointments, charges that they have vehemently denied.

Malema, however, does not believe the Guptas captured the state.

“We are not saying that the Guptas captured the state. They did not capture the state. They were stealing tenders. There is a difference between the capturing of the state and corruption. (The Guptas) were engaged in corrupt activities,” Malema said in a nationally televised broadcast during the party’s national celebration of its ninth birthday in Bloemfontein.

State capture describes a form of corruption in which business magnates and politicians conspire to influence a country’s decision-making process to advance their own interests.

“We fought successfully against a Gupta criminal syndicate. When everybody was scared of the Guptas, we confronted the Guptas and we stand here proud today that we defeated the Guptas,” he said.

“We joined forces with other political formations. We defeated the most powerful criminal syndicate,” Malema added.

The Guptas fled South Africa in 2018, when the net closed in on them as huge public protests eventually led to the African National Congress removing Zuma and appointing Cyril Ramaphosa as the Acting President.

The Guptas told the Commission of Inquiry into State Capture in 2018 that they were not prepared to return to South Africa to testify after a number of witnesses implicated them and Zuma in corrupt cases.

The brothers called the South African authorities ‘recklessly incompetent’ in their affidavit to the commission.

A number of witnesses testified the role of the Guptas in looting huge amounts and also influencing the appointment of Cabinet ministers during the nine-year tenure of Zuma as the South African president.

In 2019, the US Treasury Department imposed sanctions on the Gupta brothers, accusing them of being “members of a significant corruption network”.

But Malema believes the news of the Gupta brothers’ extradition is an attempt to take the heat off the current Ramaphosa regime, which is facing flak for mass unemployment, frequent power outages, spiralling inflation and rising instances of street crimes across South Africa.

The Gupta family, originally hailing from Saharanpur in Uttar Pradesh, reached South Africa in the early 1990s and set up a shoe store.

They soon expanded their business empire to IT, media and mining companies, most of which have now been either sold off or shut down.