Police in Texas on Thursday arrested a woman after a video of her assaulting a group of four Indian-American women surfaced and went viral in which she is abusing them and asking them to go back to India.

This racist attacking these innocent women is Esmi Upton of Plano, Texas. Full name: Esmeralda Armendarez-Upton, she is a realtor for California Federal Bank. She is a parishioner at Prince of Peace Catholic Church in Plano, TX.

She wants to be famous for all the wrong reasons. pic.twitter.com/psYfOQpNW0

The incident took place on Wednesday night in a parking lot of Dallas, Texas. The woman, who has now been arrested, is seen in the video identifying herself as a Mexican-American and assaulting a group of Indian Americans.

"I hate you Indian. All these Indians come to America because they want a better life," the woman is seen saying in the video, while repeatedly dropping the f-bomb.

The video has now gone viral and sent shock waves among the Indian-American community across the United States. The Mexican-American woman has been identified as Esmeralda Upton of Plano. 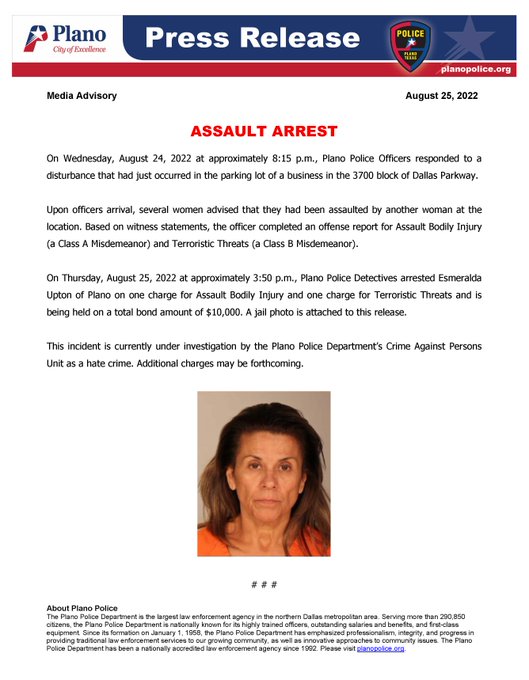 The person who posted this video wrote that "this incident occurred in Dallas, Texas after my mom and her three friends went to dinner".

"Everywhere I ... go, you Indians are ... everywhere," she is seen screaming in the video. "If life was so great in India, why you are here," she shouted while inserting the f-word and suddenly started assaulting the four Indian women.

Plano Police Detectives arrested Esmeralda Upton of Plano on Thursday afternoon. She has been charged with assault, bodily injury and one for terroristic threats and is being held on a total bond amount of US$ 10,000.

"This is so scary. She actually had a gun and wanted to shoot because these Indian-American women had accents while speaking English. Disgusting. This awful woman needs to be prosecuted for a hate crime,” Reema Rasool said on Twitter.