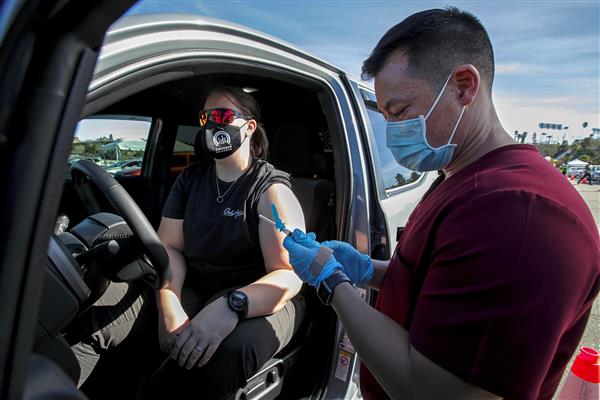 Indian-American physicians in the New Jersey area are mobilising efforts and coming out in huge numbers to volunteer and help state and local authorities administer critical COVID-19 vaccine shots to thousands of residents.

Dr Mukesh Roy, director, Public Health, Preparedness, Planning and Education at Ocean County Health Department; and Dr Avinash Gupta, cardiologist and president of the Monmouth and Ocean County chapter of Association of American Physicians of Indian Origin (MOCAAPI), are leading an initiative to help authorities in New Jersey’s Ocean County to administer the COVID-19 vaccine doses to the vulnerable population in the area.

Ocean County Commissioner Gerry Little said: “All hands on deck were required to administer the vaccine doses and the “government cannot accomplish this alone. It has to be complete cooperation with all facets of the health care system.”

Almost 2,00,000 seniors lived in Ocean County, the largest population of seniors in the state, Little had said in a statement posted on the website of the Ocean County Health Department.

It said Ocean County had appealed to Governor Phil Murphy’s staff to require hospitals to expand the vaccine distribution in order to serve the public that could now get it.

“We need all our health care providers to be a part of this effort. Access to the vaccine needs to be everywhere,” Little said in the statement.

Responding to this call, Roy and Gupta led the efforts which saw a large number of Indian-origin physicians volunteering their time and effort to help administer the vaccines to residents on the weekend.

A report in the Asbury Park Press quoted Roy as saying that organisations such as the Association of American Physicians of Indian Origin (AAPI) were helping the county to ensure that a large population was vaccinated.

“They’re giving their time here to do that. That’s been extraordinary. I believe by six months, we should have a majority of people vaccinated,” the Asbury Park Press report quotes Roy as saying.

The Asbury Park Press report quoted Gupta as saying: “We are here every week and we are going to be here until all the residents of Ocean County are vaccinated.”

“Roy has previously coordinated many disaster response activities, including during Super Storm Sandy, H1N1 and Ebola outbreaks, and under his leadership and initiative, several county residents are getting the critical COVID-19 vaccine shots,” Alok Kumar, former president of the Federation of Indian Associations (FIA), the leading umbrella diaspora organisation in the US, said.

Kumar is also volunteering his time and said this was an opportunity to help give back to “the adopted country” and support in the fight against the pandemic.

Kumar added that through the unique collaboration, over 30 physicians from MOCAAPI have volunteered every week to vaccinate residents of Ocean County. He added that in just a single day, MOCAAPI physicians vaccinated over 2,000 Ocean County residents.

A statement posted on the website of the Ocean County Health Department said New Jersey had announced that starting January 14, all state residents age 65 and older are eligible to get the COVID-19 vaccination.

Ocean County Public Health Coordinator Daniel Regenye said in a statement: “We are averaging about 500 vaccinations a day at the arena at Toms River High School North and ramping up to give out 700 daily,” he said.

“We can do more so long as we have more staff and more vaccine. We are just awaiting a timeline for its arrival. For every one person that was able to get an appointment, five or 10 couldn’t,” he added.

“We are doing all we can to accommodate everyone but we need all health care providers, from hospitals to home health services to help,” he said.

Kumar added that efforts by the MOCAPPI volunteers was being widely appreciated by County officials and residents.

AAPI has said that Indian-Americans constitute less than one per cent of the country’s population but they account for nine per cent of the American doctors and physicians. One out of every seven doctors serving in the US is of Indian heritage, providing medical care to over 40 million of the US population.

There are about 80,000 practicing Indian-American physicians, who are at the forefront of fighting COVID-19 pandemic in the United States. In addition, there are around 40,000 medical students, residents, and fellows of Indian origin in this country who have been supporting many of the hospitals affected by the pandemic, the organisation has said. PTI