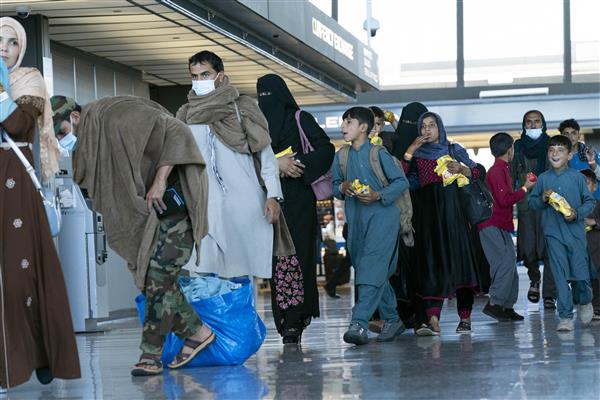 During the conversation, Mayor Lily Mei shared the work Fremont city has undertaken to plan for arriving immigrants and refugees over the years, and lessons they have learned from this work. AP/PTI file

An Indian-American from California leading in resettlement of Afghan refugees in Fremont city on Friday commended President Joe Biden and Secretary of State Antony Blinken for the evacuation of thousands of Afghans who had helped the United States in its war against terrorism for 20 years.

“President Biden, Secretary Blinken, and our troops led an airlift that evacuated tens of thousands more people than any imagined possible. We look forward to welcoming our Afghan allies to their new homes in Fremont, California, and in other parts of the United States and continue to work with Afghan Community Organisations to assist refugees, people in Afghanistan to bring peace to all,” community leader Ajay Jain Bhutoria said during a webinar organised by the State Department along with him.

During the conversation, Mayor Lily Mei shared the work Fremont city has undertaken to plan for arriving immigrants and refugees over the years, and lessons they have learned from this work. Mei shared that Fremont, which is the proud home to an extremely diverse community of immigrants, has raised over USD2,00,000 for arriving Afghan refugee settlement.

“We are fortunate to have Fremont and Hayward city and Afghan community leaders so focused on this issue and are grateful that the State Department quickly reached out to this community to better understand what they are experiencing and how their experiences and skills can help with the current resettlement process being undertaken by other city leaders across the US that are working to help and support to incoming refugees, evacuees,” Bhutoria said.