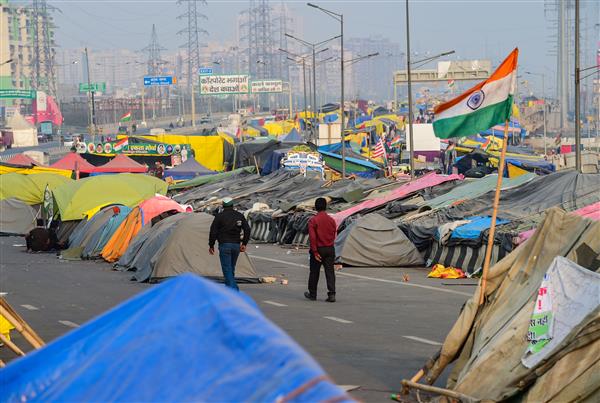 Makeshift shelter for farmers at Ghazipur border during their ongoing agitation against the three farm laws, in New Delhi. PTI

In addition to the arrest of young environmentalist Disha Ravi, the farmers’ agitation had ripples overseas, including a tense situation in Sydney and an aggressive stance by Indian missions that included specifically countering the Labour MP from Leicester East.

In Sydney, the police intervened to divert a car-rally by Indian diaspora groups supporting the farm laws which was allegedly moving in the direction of a Sikh Gurdwara.

The Australian Sikh Association “lauded the prompt police action in preventing any untoward incident” as “mobsters were proceeding towards Glenwood gurdwara after a protest rally in Parramatta”.

But a diaspora media outlet quoted the Sunday’s ‘Tiranga Rally’ participant Gayatri Sharma as stating that it was “unfortunate, we have to change the route just because some ‘Khalistani’ elements threatened to disrupt our peaceful rally”.

Prakash Mehta, president of Hindu Council of Australia, said there has been a strong brotherhood between Hindus and Sikhs. “We in Australia have marked Guru Nanak’s milestone birth anniversary recently. We condemn the recent incident if it is true that they set out to disrespect the Gurdwara. It is up to the Police now, and no one should take the law in their own hands.”

The Sydney-based South Asia Times reported that such incidents seem to be dividing the community. “It is not clear who were the organisers of the ‘Tiranga Rally’and no one has claimed any responsibility for the same.”

The Indian High Commission in London took on British MP Claudia Webbe opposing the arrest of Disha Ravi and backing the farmers’ agitation. In a four-page open letter, the High Commission invited the MP to “obtain facts and correct information from” the mission. It also pointed out that India’s internal law and order is a sovereign subject and “not open to external interference”.

All the missions abroad have been active in supporting the farm laws especially the several social media posts by PM Narendra Modi. They are also reaching out to diaspora Indians with frequent e-mailers justifying the government’s approach to the agitation.

Recently, the missions forwarded “additional inputs from the Ministry of Agriculture” that said the Government has taken all conceivable steps to sort out the grievances of farmer unions who are “obstinately demanding the repeal of all the three laws”. The laws provide the much-needed enabling environment for farmers to sell their produce across the nation from their doorstep through these Farm Acts, it said.