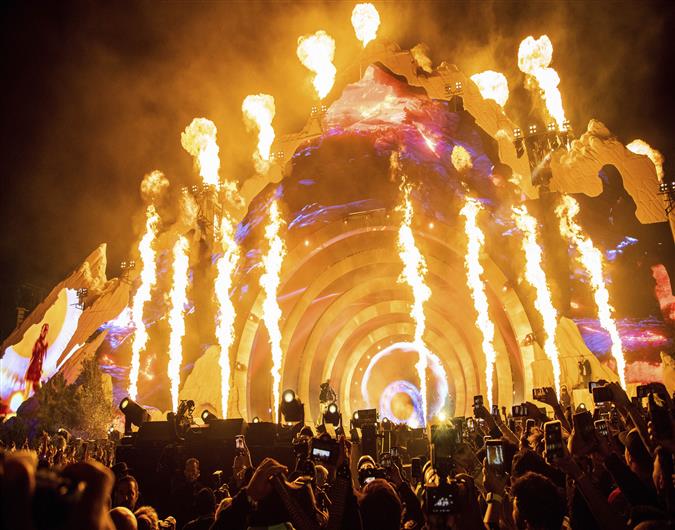 The Astroworld Music Festival in Houston where the tragedy took place. AP/PTI file

Indian-origin Bharti Shahani, who succumbed to her injuries sustained during the deadly crowd surge at rapper Travis Scott's Astroworld Festival here, has been laid to rest with an emotionally charged final goodbye.

Family and friends of Shahani gathered in large numbers on Tuesday to mourn at her public funeral services.

Shahani, 22, a bright student at Texas A&M, was with her sister and cousin at the concert when they were trapped in a crowd surge with hundreds of others. She remained in a coma for nearly a week before she was declared dead on November 11, thus becoming the ninth victim of the tragedy.

Ten concertgoers between the ages of 9-27 died in the Astroworld tragedy.

There was not a single dry eye as mourners greeted her grief-stricken parents with loving hugs and condolences as a video montage of Shahani played on a screen. Images from birth to her adult years showed the happy days of the young woman who family members say is “gone too soon”.

She was described as a pillar in the community and an “ideal child” to her parents.

Those who knew her best described what she meant to them. Family members shared beautiful memories of Shahani at her funeral service. Her father said she was always kind and caring for others, including strangers, till her end.

In death, Shahani will still be giving back to others. Her heartbroken mother said, "She signed up for organ donation as a teenager. Her organs will now go to help others. She'll carry out one last act of kindness."

“Shahani was like a younger sister to me. I think I never believed this day would actually come, like deep down, and now I don't know what to say,” her cousin who attended the festival with her said.

“There are about 200,000 words in the English language and I don't think any of those 200,000 words comes close, they all feel hollow compared to Shahani's soul. The most elegant prose you can write over the course of weeks doesn't come close to capturing the essence of who Shahani was.

Shahani's youngest sister said, “God always picks the most amazing and good people to take with him and you were one of them,” she said.

“The last words that Shahani said to me were when she was dropping me off at my friend's house and I said ‘see you tomorrow night and you just smiled at me and said....” Unable to finish, the sister broke down crying and was escorted away.

Several took to social media to pay rich tributes to her, “It was extremely heartbreaking to say final goodbyes to Shahani. She was extremely selfless and caring. As her parents described her, she was love. She was a true reflection of her amazing parents. Please pray for her parents, both of her sisters and the rest of her family.”

She was a senior at Texas A&M. She had plans to come home and help her family's business after graduating. Her family said she loved badminton, making coffee and playing with her Husky, Blue. PTI