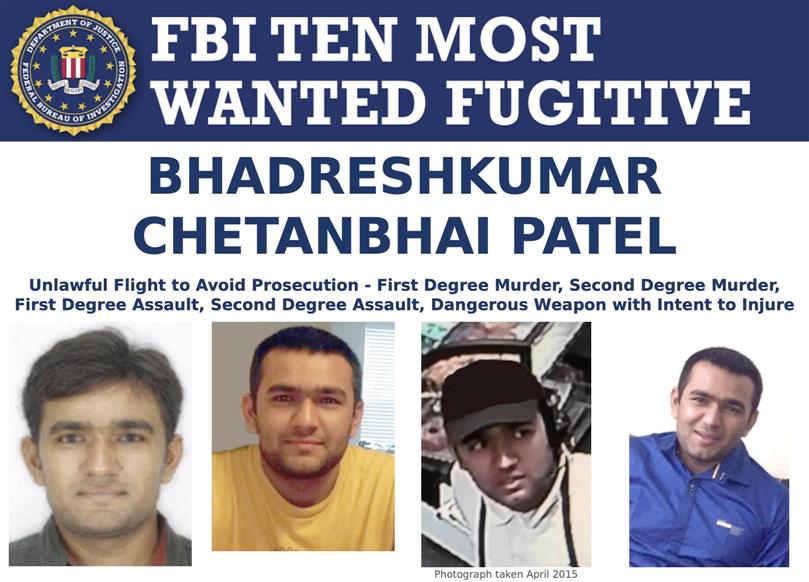 The US’ Federal Bureau of Investigation (FBI) is reminding the public of a $1,00,000 reward offer for information leading to the capture of Indian-origin Bhadreshkumar Chetanbhai Patel, who has been listed by the agency as one of the “10 Most Wanted” since 2017.

Patel has been on the run since 2015 when he allegedly killed his wife, Palak, with a knife inside a Dunkin Donuts coffee shop in Hanover, Maryland state.

He has been charged with murder.

Although he was put on the list in 2017 with the $1,00,000 reward for information leading to his capture he has not been caught, and on Friday, the FBI tweeted information about him and the reward to draw attention to the case and the reward offer.

The FBI is asking anyone who knows where he is to contact the agency or the nearest US consulate or embassy.

Bhadreshkumar Chetanbhai Patel is wanted for allegedly killing his wife while they were working at a doughnut shop in Maryland in 2015. The FBI is offering a reward of up to $100,000 for information leading to Patel's arrest. #FugitiveFriday https://t.co/5gnFGbdoTG pic.twitter.com/sNh0ZYfCpR

Patel, who was 24 at that time, allegedly hit his 21-year-old wife in the face with a kitchen knife and stabbed her several times in the backroom of the shop where they both worked while customers were still there, according to officials quoted by WTOP radio.

He was last known to have taken a taxi from a hotel in New Jersey to a train station in Newark in the state.

Tim Altomare, who was the police chief of Anne Arundel County at that time, told the radio: “The violence in this case was stark. It was heart-wrenching and it was a shock to our collective conscience on the police department.”

The WTOP reported that investigators think that Patel was still in the US in 2017 when he was put on the FBI list. According to Altomare, investigators believe that someone was knowingly helping Patel or was interacting with him without knowing about his alleged crime.

The radio reported that according to Gordon Johnson, who was the special agent in charge of the FBI’s Baltimore field office in 2017, Patel was put on the list because of the brutality of the crime and the likelihood that someone outside the US knew where he was.

The couple’s visas expired about a month before the killing and investigators believe that Palak Patel wanted to return to India, but her husband opposed it, the WTOP reported.

The FBI’s notice says that the accused “should be considered armed and extremely dangerous”.

According to the FBI he was born in Kantrodi Ta Viramgam in Gujarat. IANS