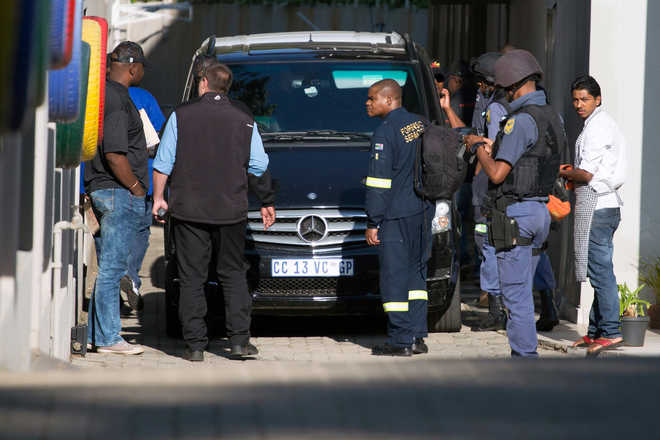 Two of the three Indian-origin Gupta brothers, who fled South Africa with their families amidst investigations into their alleged looting of billions of rands from state and parastatal organisations, are now officially wanted fugitives after Interpol has issued red notices against them.

A red notice is an alert to all Interpol member states that an individual is a wanted fugitive, but is not equivalent to an arrest warrant. However, it strengthens the case of a country negotiating the extradition of wanted criminals from another state.

Interpol has issued a “red notice” against two of the brothers, Atul and Rajesh, said the National Prosecuting Authority’s Investigating Directorate head, Hermione Cronje, in a statement on Monday.

The move would help the prosecution to bring Atul and Rajesh along with their elder brother Ajay to South Africa so that they stand trial for their alleged role in a fraud and money laundering case worth 25-million rand linked to the failed Estina Dairy Farm project in Free State province.

The wives and several associates of the Gupta brothers are also on the Interpol list.

The eight suspects on the Interpol notice are wanted in South Africa to answer to allegations that they looted over 25 million rands.

The project was supposed to benefit small-scale emerging farmers but did not materialise.

South Africa has already requested the extradition of the Gupta brothers from Dubai, where they are believed to be in self-exile after they fled South Africa in 2018.

A number of witnesses at the Commission of Inquiry into State Capture have testified about the role of the Guptas in looting huge amounts and also influencing the appointment of Cabinet ministers during the nine-year tenure of Jacob Zuma as president of the country.

The Guptas were so close to Zuma that several former politicians testified at the Commission how they had been advised of their imminent appointments as ministers even before Zuma contacted them.

Zuma, who was ousted by his own African National Congress three years ago, is also this week facing a controversial 15-month jail sentence from the apex court after the Constitutional Court found him in contempt of court for his repeated refusal to testify at the Commission.

A close Gupta associate, Iqbal Meer Sharma, remains in custody after he appeared in court last month on charges of laundering money for the project through his company.

His case was postponed on Monday until further notice as South Africa is currently in lockdown as infections and deaths due to COVID-19 soar daily.

While analysts and NGO’s who have been calling for the Guptas to be tried for this and other matters welcomed the Interpol action, they cautioned that public elation should not create the impression that their return to face trial would happen very soon as extradition processes can take a long time.

“(Red Notices) are used to simultaneously alert police in all our member countries about internationally wanted fugitives. Police in other countries can then be on the watch for them and use the Red Notice to support extradition proceedings. Red Notices help bring fugitives to justice, sometimes many years after the original crime was committed,” it said.

The Interpol notices are the latest in a wave of international actions against the Guptas and another associate, Salim Essa.

In 2019, the US said that Atul, Ajay and their younger brother Rajesh Gupta as well as Essa were part of a “significant corruption network in South Africa”, declaring them persona non grata—a person who is unacceptable or unwelcome.

In April this year, the UK also imposed visa bans on them and froze their assets in the country.

Bank of Baroda (BoB) account signatory Nath is also wanted because he was in charge of the South African operations of the bank when they opened accounts for the Guptas.

This was after all South African banks blocked the accounts of all Gupta-linked companies as details began emerging of their activities in allegedly looting billions of rands from state and parastatal institutions.

The local branch of BoB was subsequently shut down, the head office claiming that this was due to a downscaling of its international operations. The Guptas tried to stop the closure, which the Pretoria High Court dismissed with costs.

BoB’s South African chief executive at the time, Manoj Kumar Jha, said in answering papers in the matter that the bank had earlier reported 45 ‘suspicious transactions’ worth about USD 300 million to the South African Financial Intelligence Centre between September 2016 and July 2017.

The Gupta family arrived from Saharanpur in India in the 1990’s as democracy dawned with the release of Nelson Mandela to grow their business empire from a humble retail shoe store to a vast empire spanning information technology, mining and media. PTI