The annual listing identifies 171 billionaires in all, 24 more than in 2020 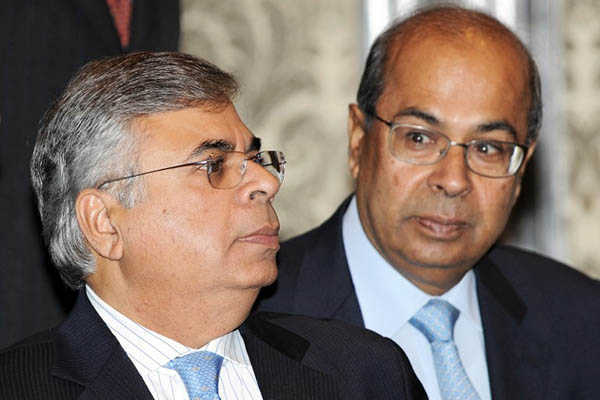 Mumbai-born brothers David and Simon Reuben held on to their rank as the second-richest in the UK with an estimated net worth of GBP 21.465 billion in the annual ‘Sunday Times Rich List', topped by Russian-origin UK-US dual national Sir Leonard Blavatnik with an estimated fortune of GBP 23 billion.

In a preview to the rankings in ‘The Times' on Friday, the Hinduja brothers - who had shared the second spot with the Reubens last year - slipped to third place with an estimated net worth of GBP 17 billion.

They are followed by British inventor-entrepreneur Sir James Dyson and family, who dropped from the top spot in 2020 to number four with a fortune estimated at GBP 16.3 billion.

In fifth place is steel tycoon Lakshmi N Mittal, who added GBP 7.899 billion to his fortunes over the past year to climb several spots from his 19th rank in 2020.

“He is spending nearly GBP 290 million on a pilot project to slash its [ArcelorMittal Group] carbon footprint, no small endeavour for a company that mined 58 million tonnes of iron ore and made 71.5 million tonnes of crude steel during 2020,” noted the listing for Rajasthan-born Mittal.

“The Mittals' stake in the business is worth GBP 10.5 billion, up more than GBP 7.5 billion in a year. ‘The first quarter of this year has been our strongest in a decade,' Aditya Mittal said this month. Aditya, 45, Lakshmi's son, became chief executive of ArcelorMittal in February,” it adds.

The second-richest Reubens have been found to have embarked on a buying spree during the pandemic, snapping up undervalued hotels and other properties.

“The Reubens have been buying US buildings to upmarket brands that are unlikely to be damaged by the pandemic, such as Tiffany, Armani and Alexander McQueen. There have also been significant investments in Mallorca and Spain, where the brothers plan to build hundreds of luxury retreats,” notes the Rich List.

The other Indian-origin entries in this year's top five, Sri and Gopichand Hinduja, of the Hinduja Group of companies, are listed together in the ranking but a family rift has also been flagged in the wake of a legal battle that emerged last year.

“Cracks have appeared in the Hindujas' business empire, which has interests ranging from van manufacturing and luxury hotels to banking and healthcare,” notes the report.

“London-based Sri Hinduja, 85, has become embroiled in a legal skirmish with his three brothers, Gopi (GP), 81, Geneva-based Prakash (PP), 75, and Ashok (AP), 70, who is based in Mumbai… Sri is claiming personal ownership of the Switzerland-based Hinduja Bank, which is overseen by his eldest daughter, Shanu, and her son Karam,” it notes.

In June last year, GP, PP and AP Hinduja had issued a joint statement to say that it is "very unfortunate" that the proceedings are taking place.

“They go against our Founder's and family's values and principles that have stood for many decades, especially, ‘everything belongs to everyone and nothing belongs to anyone". We intend to defend the claim to uphold these dearly held family values,” they said at the time.

The annual listing identifies 171 billionaires in all, 24 more than in 2020. Their combined fortunes have risen to GBP 597.269 billion, up 22 per cent in 12 months despite the wider economic impact of the coronavirus.

The other Indian-origin billionaires within the top 100 in the UK include metals tycoon Anil Agarwal at No. 15 with GBP 9 billion; Sri Prakash Lohia at 36th with GBP 4.783 billion; Lord Swraj Paul and family at 82nd with GBP 2 billion; and Navin and Varsha Engineer at 96th with GBP 1.7 billion.

"The fact many of the super-rich grew so much wealthier at a time when thousands of us have buried loved ones and millions of us worried for our livelihoods makes this a very unsettling boom." — PTI