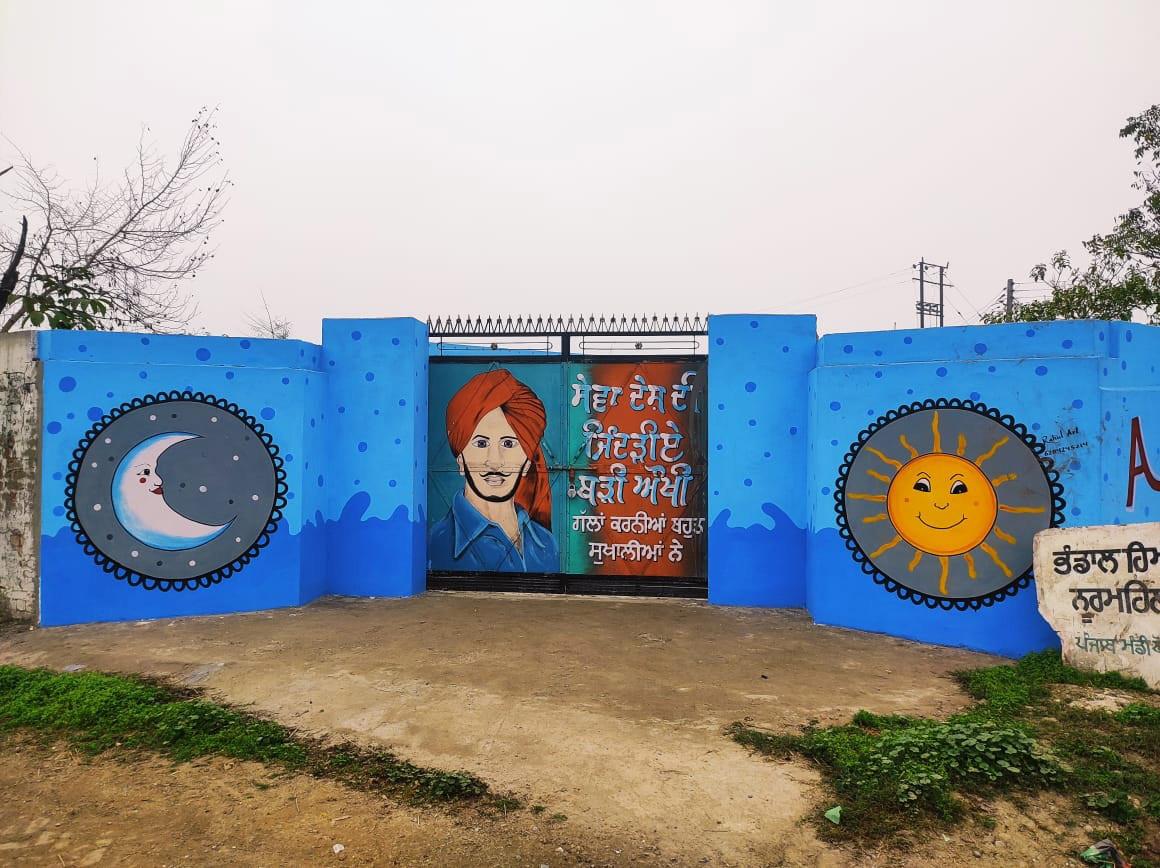 Five years ago, rainwater used to enter classes at Government Primary School, Bhandal Himat. As a result, snakes, too, had a field day in the school and students had no other option than skipping classes.

Seeing the plight of students, a couple of Non-Resident Indians came forward and turned the institute into a heaven. With assistance pouring in from abroad, scales tilted in such a manner that students quit private schools to get enrolled at one of the most sought after institute in the area.

Even on the boundary wall – catchy motifs and quotes of freedom fighters welcome students.

Schoolhead Munish Mohan said, “Five years ago, the scenario was quite different. Students couldn’t attend classes during monsoon. NRIs completely transformed the school. The new structure was raised and vitrified tiles were used for flooring. From 30 kids, we now have 75 students enrolled in the school. Even students from private schools prefer this institute. NRIs pooled in around Rs 40 lakh to give students a decent place to study.”

He said, “Family of Surjit and Sarabjit Singh took the initiative and raised the ground-level of the school by donating around Rs 30 lakh. Sukhwinder Kaur from Belgium donated Rs 4 lakh. She always encourages us to work hard. We are also thankful to the Himat Bhandal Welfare Society, which donates generously.”

Himat Bhandal and Himat Buta are two villages and NRIs have also contributed to give fillip to Primary School, Himat Buta.

UK-based NRI Surjit Singh, his brother Sarabjit Singh, and Belgium-based Sukhwinder Kaur have always been at forefront when it comes to donation. The Bhandal Buta Welfare Society also pitches in with money from time to time for upkeep of infrastructure.

A host of other NRIs, including Sohan Singh, Kulbir Singh, Surjit Singh Sidhu, Surinder Singh, Gurdev Chand, Lal Singh Lally, Jarvinder Singh, Simrandeep Singh and Harinder Singh, among others, also contributed to ensure that students do not face hardships. The NRIs contributed for renovation of gurdwara in the village.

Sarabjit Singh said, “The village school was in a poor state. It bothered my UK-based brother Surjit Singh. Thus, he had been sending money for renovation of the school. It makes us very happy to see that it is one of the most sought after institute in the area now.”

He said, “My brother studied till Class VIII at the village school. Despite settling abroad, he is deeply aware of the issues beings faced by villagers. He also donates for the needy.”