Indian-origin Cabinet minister, who is leading the UK presidency of the 26th COP26 to UNFCCC, has described his role as “shepherd-in-chief” of the two-week-long summit 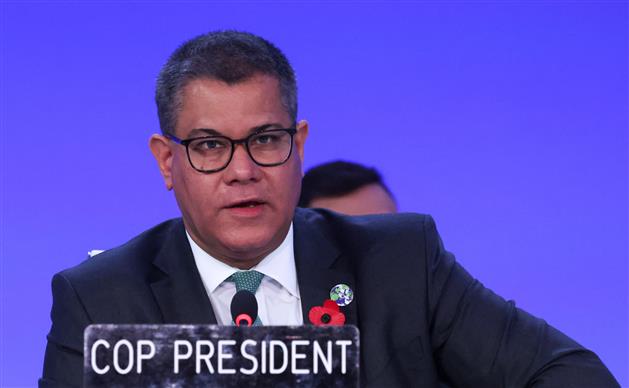 The COP26 summit is “our last best hope” to agree on implementing the Paris Agreement, which limits the rise in global temperatures and keeps the goal of 1.5 degrees Celsius alive, summit President Alok Sharma said as he formally opened the climate conference in Glasgow on Sunday.

The Indian-origin Cabinet minister, who is leading the UK presidency of the 26th Conference of Parties (COP26) to the United Nations Framework Convention on Climate Change (UNFCCC) at the Scottish Event Campus (SEC), has described his role as “shepherd-in-chief” of the two-week-long summit.

“I believe we can move negotiations forward and launch a decade of ever-increasing ambition and action... but we need to hit the ground running,” Sharma said, in his opening speech on Sunday, which marks the operational launch of the summit.

“Six years ago, in Paris, we agreed our shared goals,” he said, referring to the 2015 agreement in the French capital to keep global warming to below 2C Celsius and endeavour to reach 1.5C.

“COP26 is our last best hope to keep 1.5C in reach… If we act now and we act together we can protect our precious promise and ensure where Paris promised, Glasgow delivers,” he said.

Addressing reporters earlier, the minister called upon the more than 120 world leaders gathered for the World Leaders’ Summit scheduled for Monday and Tuesday to do more for the planet.

“My message to them is very clear. Leave the ghosts of the past behind you and let’s focus on the future and unite around this one issue that we know matters to all of us, which is protecting our precious planet,” he noted.

“This is a chance for all these countries to show leadership, this is the point where they have to stand up and be counted. I want more out of every country,” he said.

“But I think the point is we have made progress and then we’re going to have to take stock on where there is a gap between where the commitments are and where we need to be,” Sharma added.

Scientists say that keeping global warming below 1.5C will avoid the worst impacts of climate change, and at the Paris COP in 2015, world leaders had agreed to work towards this.

The two-week COP26 summit will see delegates from about 200 countries discuss on how to cut emissions by 2030.

Prime Minister Narendra Modi will be among the world leaders addressing the World Leaders’ Summit at the start of the meet, along with British Prime Minister Boris Johnson and US President Joe Biden.

Prince Charles, an avid environmentalist, is also participating in the discussions and has urged governments to work with the private sector in a bid to make progress “for the sake of humanity”.

More than 25,000 people are expected to descend on Glasgow over the course of the conference until November 12, including international delegates and protestors.

COP26 is seen as crucial if climate change is to be brought under control, with the UK hoping to agree a deal between over 200 countries on certifiable mechanisms to reduce and eventually eliminate carbon emissions by the middle of this century. PTI