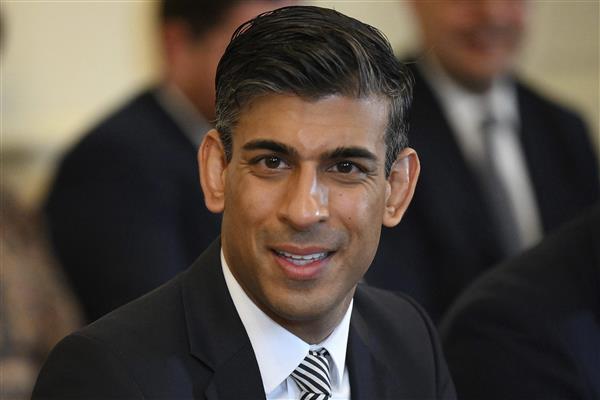 Former Chancellor Rishi Sunak on Monday topped the latest round of voting among the Conservative Party members of Parliament as the race to replace Boris Johnson as Prime Minister narrowed down to four, with Tom Tugendhat out of the contest after receiving the lowest votes.

The British Indian former finance minister received 115 votes in the third round of voting, with Trade Minister Penny Mordaunt holding on to the second spot with 82 votes followed by Foreign Secretary Liz Truss with 71 votes, and former equalities minister Kemi Badenoch at 58 votes.

Tom Tugendhat, Tory backbencher and House of Commons Foreign Affairs Committee Chair, dropped his tally from the previous 32 to 31 votes and was knocked out of the contest.

While the top tier of the voting tally remains largely unchanged, Sunak has picked up 14 more votes from the previous round of 101, however, Mordaunt has dropped one from 83 in the second voting round last week.

Truss has improved her tally from 64 and Badenoch is up from 49 in the last round.

The magic number is seen as 120, with the candidate receiving the backing of at least 120 of his or her Conservative Party colleagues guaranteed a spot in the final shortlist of two candidates to compete for the Tory membership votes.

The last few rounds of voting are being held this week as a third live television debate, scheduled to be hosted by ‘Sky News' on Tuesday evening, was cancelled after the channel said both Sunak and Truss had declined to take part.

It is believed the decision is influenced by the clashes between the two candidates over disagreements on tax and economic measures as former Cabinet colleagues in the Boris Johnson led government.

The tension played out live on air as Truss clashed with Sunak repeatedly during an ‘ITV' debate on Sunday, sparking concerns of damaging Tory infighting.

A snap poll after the debate put Sunak in the lead but Truss was trailing in last place.

According to the BBC, the foreign minister wants to focus on hustings between Tory MPs, who hold the current voting power, and Sunak's camp has indicated that he would be open to more debates if he qualifies for the final two.

The cancellation of Tuesday's debate comes amid concerns in the Tory party about the harsh tone of the campaign.

Ahead of the TV debate cancellation, former Cabinet minister Brandon Lewis said the campaign had so far been "plagued by allegations of dark arts and dirty tricks".

Writing in ‘The Times', the senior Tory MP said that "aggressive briefing and counter-briefing only adds to [Opposition] Labour's research folders", and would prove a "gift to the Opposition".

The next round of voting is expected on Tuesday to further whittle down the shortlist, with votes scheduled until only two candidates remain in the fray by Thursday.

The final two will then hold hustings up and down the UK to win over the Conservative Party's membership of around 160,000 eligible voters to cast postal ballots in their favour.

The winner of that ballot will go on to be elected the new Tory leader and take over from caretaker Boris Johnson as the new British Prime Minister by September 5.