Sikh community in US pledges to work for development of Punjab 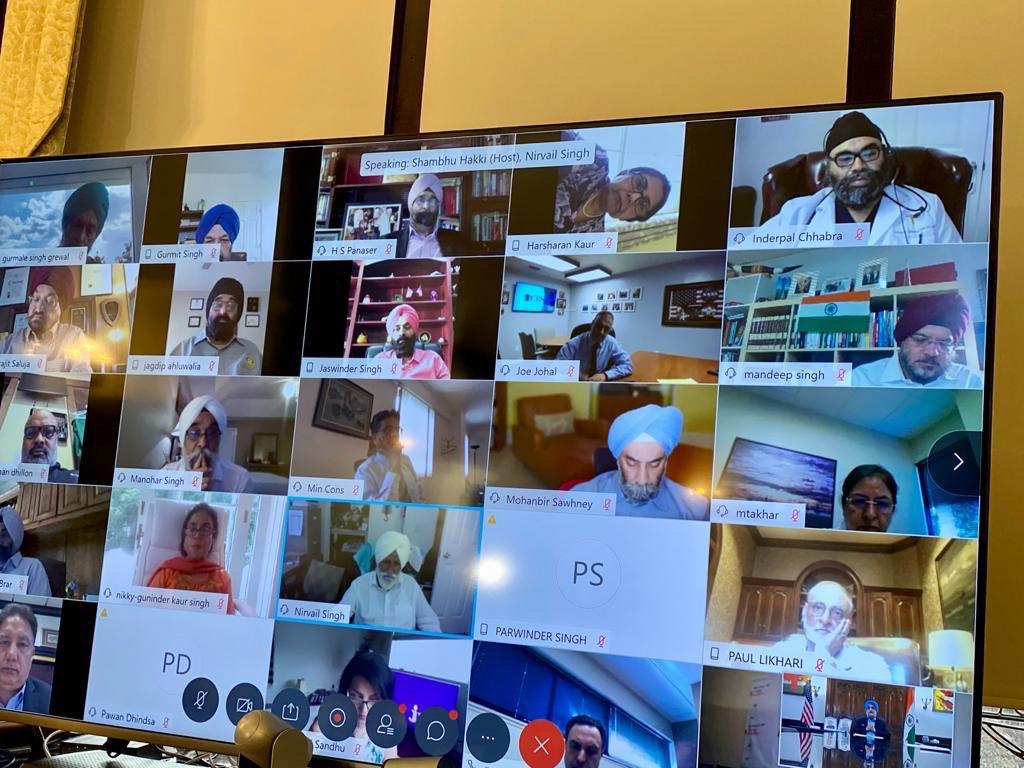 Grab of the virtual conference of Sikh communities with India’s Ambassador to the US Taranjit Singh Sandhu. Credits twitter@SandhuTaranjitS

The Sikh community in the US has vowed to work for the development of Punjab, particularly in areas of education and environment, as they hailed the outreach efforts of the Indian Embassy here in resolving their issues.

The Sikhs in America are willing to invest in the development of Punjab, eminent Sikh American businessman Gary Grewal told PTI after the first-ever virtual meeting of the community with India’s Ambassador to the US Taranjit Singh Sandhu last week.

About 100 eminent Sikh leaders from across the country participated in the virtual meeting with Sandhu, who organised the event as part of his outreach with the community.

“He encouraged us to do other good things. God has blessed us here, we should share with others...offering scholarships to students. Everybody (from the Sikh community) was very happy to be at the meeting. There was a lot of sharing of ideas and thoughts,” Grewal said, adding that many members of the community also discussed the reopening of the Kartarpur Corridor with Pakistan.

“I appreciated that Ambassador Sandhu has invited the Sikh community members for this dialogue and it will be important there is concrete follow up to these suggestions which can engage many to contribute positively for the betterment of the younger generation in Punjab,” said Dr Rajwant Singh, president of EcoSikh, and co-founder, National Sikh Campaign.

He said it was important that the vast Punjabi and Sikh diaspora is engaged in rebuilding Punjab and create a brighter future for the state.

“We should be looking toward to future and India-US relations have great potential. Ambassador Taranjit Sandhu is the right person to move these forward,” said Surjeet Sidhu, an eminent Sikh American.

“I am committed to using technology for uplifting human lives. I’ll be thrilled to bring technology and technical jobs to Punjab in a real practical way,” tweeted Kuldip S Pabla after the event.

Sonia Dhami, a trustee of the Sikh Foundation and Fine Arts Commissioner for the city of Cupertino, said one of the ways they can work together was in the field of publications on Sikh arts, literature, religion and heritage.

According to Dr Singh, Sandhu invited the members on the call to support students in the rural areas and sponsor scholarships for education.

The Sikh Human Development Foundation, a charity organisation based in Washington, the NRI Sikhs have given scholarships for higher education to 7,300 students from low-income families in Punjab and other neighbouring Northern Indian States in the last 20 years, Singh said.

The results had been thrilling as most of these students have graduated and have found jobs, he said, adding that he suggested the initiative needed to be expanded with the support of the worldwide Punjabi and Sikh community.

EcoSikh had offered to plant more forests in other parts of India to mitigate the effects of climate change and was ready to partner with the Central and state governments on this challenge facing Punjab and India, he said.

EcoSikh has worked closely with Punjab governmental agencies on environmental issues and the state government has adopted its idea of planting 550 trees in each village in Punjab.

Nikki Guninder Kaur, a professor and author from Colby College, pointed out that there was ignorance about Guru Nanak in the country, asserting that it should be the top priority of the Sikh community. PTI