The Taliban swept across Afghanistan this month, seizing control of almost all key towns and cities including Kabul in the backdrop of the withdrawal of the US forces 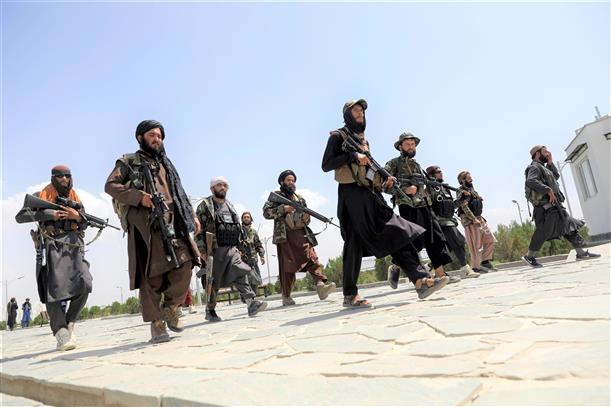 The Taliban is not allowing 140 Afghan Hindus and Sikhs to visit India on the occasion of the 400th birth anniversary of Sikh Guru Tegh Bahadur, Delhi-based think tank Indian World Forum claimed on Thursday.

According to the statement, the Sikh Guru's birth anniversary that is scheduled to be celebrated on Sunday with a 'kirtan darbar', and is expected to witness attendance by pilgrims of the Hindu and Sikh communities from different parts of the world, is a "life-time event".

"A group of 140 Afghan Hindus and Sikhs who were supposed to board a special flight yesterday evening were prevented from entering the airport at Kabul at the last minute," claimed Puneet Singh, president of the Indian World Forum.

The Forum added that the group was travelling to India to attend the celebrations organised to commemorate the 400th birth anniversary of Guru Tegh Bahadur.

The India World Forum has appealed to the Taliban to facilitate an early departure for these pilgrims to ensure that they can participate in the celebrations in India, it said.

"I appeal to the Taliban to facilitate an early departure of Afghan Hindu and Sikh pilgrims in the interest of humanity at the highest level.

"The Hindu and Sikh communities in Afghanistan have significantly contributed to the development and economic growth of the islamic nation, and they should be granted free and safe access to arrive and depart," said Singh.

The Taliban swept across Afghanistan this month, seizing control of almost all key towns and cities including Kabul in the backdrop of the withdrawal of the US forces.

"A group of 140 Afghan Hindus, Sikhs were scheduled to arrive later today at Delhi from Kabul on an annual pilgrimage tour and to attend the celebrations organised to commemorate the 400th birth anniversary of Guru Tegh Bahadur.

"A 'kirtan darbar' is scheduled for August 29. Many members of our community from various parts of the world have already arrived to attend the same. Unfortunately, the Taliban has denied them access to the Kabul Airport," the statement quoting Partap Singh (Afghan Origin), President of Gurdwara Sri Guru Arjan Dev Ji in New Mahavir Nagar, said.

Guljeet Singh (Afghan Origin), president of Gurdwara Guru Nanak Sahib Ji at Vikaspuri said it is sad to note that our brothers and sisters from Afghanistan aren't being allowed the pilgrimage.

"Each year, our Afghan origin community organises tours to India to visit historical gurdwaras. After suspension of commercial international flights from Afghanistan due to the political situation, we had requested the Indian government to facilitate their attendance at the celebrations.

"Regret to note that last night the pilgrims were turned back by Taliban security forces from the airport after waiting for more than 15 hours in their convoys," the statement quoting Singh claimed.

Meanwhile, several gurdwaras across India, including those in Simla, Bhopal, Kanpur and Jammu organised 'sukran ki ardas' to express gratitude to Prime Minister Narendra Modi and the Indian government for ensuring the return of three copies of the Sikh holy book Guru Granth Sahib that were flown in from Kabul on Tuesday. — PTI