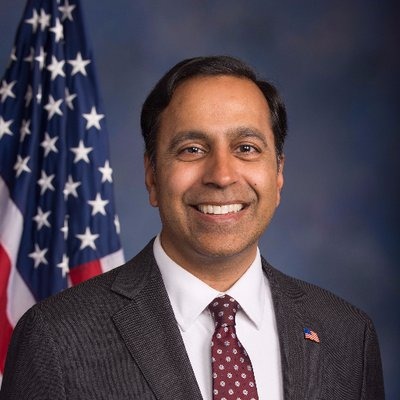 President Trump was the one who first recognised the voting potential of Hindu Americans in 2016.

The two million Hindus in the United States are a vital and key voting bloc in several swing states this presidential elections, Indian American Congressman Raja Krishnamoorthi said as he told fellow community members that it was their dharma to exercise their franchise.

In his virtual keynote address at the formal launch of the 'Hindu Americans for Biden', Krishnamoorthi, who is the three-time Democratic Congressman from Illinois, urged community members to vote for Democratic presidential candidate Joe Biden and his Indian American running mate Kamala Harris on November 3.

“I feel it is so important to elect Joe Biden because of a Hindu value 'Vasudhaiva Kutumbakam' (entire world is a family) a core tenant of Hindus - we believe in treating everyone with dignity and respect,” he said.

“It is an old saying in Washington DC, which is, if you don't have a seat at the table, you're on the menu. And none of us on this zoom call or our families, or communities, or Hindu Americans as a whole can afford to be on the menu, and neither can our agenda. That's why it's so important that you vote,” he said.

“This year is the most important election of our lifetime before us. In 60 days, on November 3rd, believe it or not, the two million Hindu, Americans in this country will be a vital and key voting bloc in several swing states. Not only Florida, but Virginia and Pennsylvania and Michigan and Wisconsin, and the list goes on and on. It is our duty, indeed it is our dharma to vote,” Krishnamoorthi said.

“Voting is our Dharma, and it's at the heart of our society,” said Amit Jani, Biden Campaign National AAPI director.

Moderating the launch event, Niki Shah, co-state director of New Jersey, South Asians for Biden, said that hate crimes and acts of vandalism have increased in the last three and half years and that it was unacceptable.

According to the Federal Bureau of Investigation, under President Donald Trump, hate crimes against Hindus have tripled, Shah said.

“It is my very strong believe that when we have that phenomenon going on, that we have a president that has an actual plan... Biden is going to make sure there are the resources we need to fight hate crimes,” said Machmud Makhmudov, policy analyst, Biden For President.

Rajesh Patel, spokesperson, Maninagar Swaminarayan Temple Kentucky, gave a brief presentation on the vandalism of the temple. “We, as mandir folks, had never experienced anything like this (hate crime at a mandir),” he said.

Krishnamoorthi said that Biden is a man of faith, a man of principle, and most importantly, he's a man who believes in equality.

“He believes that everyone should be treated the same with dignity and respect,” he said.

This is for the first time that two major political parties have made specific outreach efforts towards the Hindu Americans. While the Trump camp has created the 'Hindu Voices for Trump' campaign, Biden camp launched the 'Hindu Americans for Biden' campaign.

“Hindus for Trump honours contributions by the millions of Americans of Hindu faith. The inclusive economy, commitment to building up US-Indian relations, and fierce support for religious liberties for all is unmatched. Re-electing President Trump will reduce obstacles to religious freedoms for Hindus in America,” the Trump Campaign said.

President Trump was the one who first recognised the voting potential of Hindu Americans in 2016, when he not only addressed a rally for Hindus in New Jersey, but also his family members visited Hindu temples in key battle ground States like Virginia and Florida. PTI