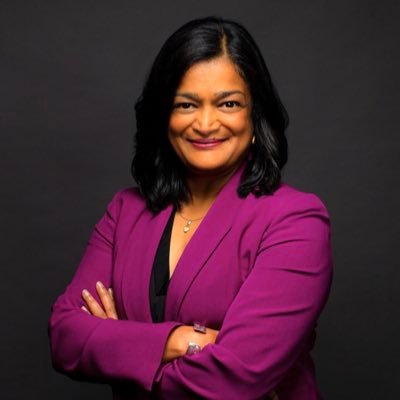 A 49-year-old man in the US has been charged with felony stalking, weeks after he was arrested for standing armed with a pistol outside Pramila Jayapal's home and yelling expletives like "Go back to India" while threatening to kill the Indian-American Congresswoman.

The King County Prosecutor's Office requested USD 500,000 in bail, claiming the defendant, Brett Forsell, is "likely to commit a violent offense if free in the community," according to court documents.

Forsell was charged on Wednesday. He allegedly told investigators he would return to Jayapal's home as soon as he is released.

Forsell was armed with a .40 caliber Glock semi-automatic pistol with a live round in the chamber while outside of the representative's home, according to court documents, Seattle-based news website King5.com reported.

On July 9, Jayapal and her husband heard loud yelling coming from outside their home in West Seattle. Jayapal's husband, Steve Williamson, went out on the front porch to investigate and the couple heard male voices yelling expletives and saying "Go back to India," the report said.

The couple also heard a voice telling Jayapal to harm herself and other comments alleging she was a communist. When Williamson opened the door, he said one of the males got back into a vehicle driven by the other male and sped away.

Chennai-born Jayapal released a statement on Wednesday following news of the charges.

“The news today from the King County Prosecuting Attorney's office that they have charged Mr Forsell with felony stalking demonstrates that the justice system is doing its work,” she said.

“I am grateful to the King County Prosecutor's Office for holding this man accountable for his dangerous actions, to the victim's advocate for her assistance throughout the process, and to the Seattle Police Department, U.S. Capitol Police, and the House Sergeant at Arms for continuing to keep my family, me, and my staff safe, said the first-ever Indian-American Congresswoman who represents Seattle in the US House of Representatives.

“Now, the Prosecutor's Office and the courts will do their important work to protect all of us,” she added.

Jayapal had reported the incident and said there was a similar incident in front of her home on July 2.

Later that night, a car returned and sped down Jayapal's street, revving its engine, before coming to a stop in her driveway, according to court documents.

Williamson told Jayapal to go upstairs for her safety and call the police. He said the man was aggressive and was getting out of his car and coming toward the couple's driveway.

Soon after, Seattle police arrived on the scene and arrested Forsell for malicious harassment.

A neighbour of Jayapal's said she heard Forsell say something similar to "Go back to India" and threaten to kill Jayapal, according to court documents.

The neighbour also reported one of the men, who she believed to be Forsell, was erecting a tent, the report said.

Forsell admitted to yelling profanities but denied making comments about Jayapal's race or ethnicity, or telling Jayapal to harm herself. He also admitted to driving past Jayapal's house and yelling expletives another time. He said his only bias against Jayapal was her political beliefs and her status as a democrat, according to court documents.

Forsell told FBI agents he returned to Jayapal's property and began setting up a tent on the other side of the road from her house. He also said he had been drinking that night and he struggled with mental illness, according to court documents.

The Seattle man described his actions toward Jayapal as a "manifestation of a manic episode," the report said.

The video given to investigators by Williamson captured two voices yelling expletives in front of Jayapal's home, including one comment including the word "India," but investigators could not be sure whether or not it was Forsell's voice making that comment, according to court documents.

Another voice could be heard "telling Pramila to kill herself," but the voice did not sound like Forsell's.

She visited India last year to meet her ailing parents.