The 43-year-old Indian-American physician was sworn in as the 21st Surgeon General of the US last month. 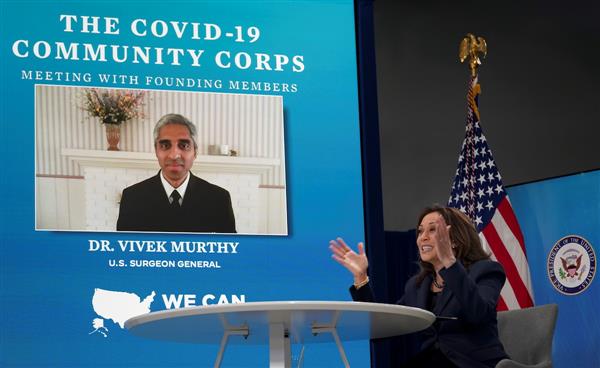 Vice President Kamala Harris has applauded Surgeon General Vivek Murthy for his tireless efforts in the fight against the coronavirus pandemic that has battered the country.

The 43-year-old Indian-American physician was sworn in as the 21st Surgeon General of the US last month.

"Thank you, Mr Surgeon General Murthy. And in front of all of the friends who are here, I just have to tell you he has been tireless for months and months, working on this issue," Harris said during a virtual meeting to discuss COVID-19 public education efforts.

"So, in front of everyone, I want to thank you, Vivek, for all you have been doing to lift us up as a nation and to also lift up the importance of following the science and the fact that we are in this together, and so lifting up the power and significance of the collective," Harris said.

"I'm so honoured to introduce one of our nation's most important leaders. One who has broken barriers and lifted up communities, a leader who is kind, and strong, and who inspired millions of people, including myself and a daughter, who called her Kamala auntie," Murthy said.

"To serve as a surgeon, in my role, I'm charged with looking out for the health and well-being of each and every American. I consider this to be a sacred responsibility, particularly in this great moment. When we are living through a once in a century," he said.

Observing that COVID-19 has caused tremendous suffering for millions of Americans, he said many of them lost family members to this virus.

The US has the highest coronavirus case tally in the world at 30,539,175 and the highest death toll at 553,120, according to data from Johns Hopkins University.

COVID-19 has taken the lives of several members of Murthy's extended family. During his confirmation hearing in February, he said that seven of his family members in India and America have died due to the virus.

"I myself have lost seven, including my uncle earlier this year. Many of us have also felt what it's like to be worried about your loved ones getting killed, especially family members of ours who are elderly, or who might work on the frontlines," he said.

In her remarks, Harris, the first woman, the first Black American, and the first South Asian American to be elected Vice President, talked about racial inequalities.

"It is very important to the President that we speak truth and address racial inequities across the board, but on this topic, in particular, in our healthcare system. And, again, these disparities existed long before," she said.

"When we look at the rates of infection and death in the Asian community, in the African American community, Latinos, our native community, the numbers are really unacceptable and tragic. In terms of the impact on these communities, of course, profound,” she said.

This is something that the administration has been addressing, she said.

"We have a Racial Equity Task Force that is very much a part of our whole approach to this.  And, also, you will often hear the president and all of us talk about the importance of the equitable distribution of resources and support," Harris said.

As US Surgeon General, Murthy will advise President Biden on the coronavirus pandemic and will be the federal government's leading voice on public health.

In 2013, Obama nominated Dr Murthy to be the Surgeon General. He was the youngest ever to hold the office at the age of 37. However, he had to abruptly leave the position during the Trump administration.