There’s a lesson for India in the grim Floyd saga 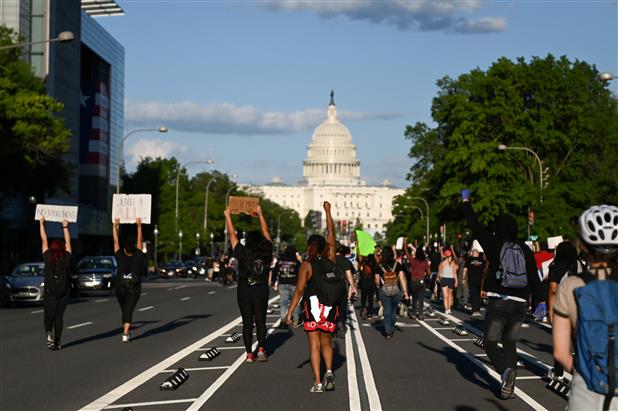 Raging protests outside the White House forced the security service to push the US President into the safety of a bunker, while rioting paralysed nearly 40 cities, which were later placed under curfew. US President Donald Trump, in turn, blamed it all on Antifa, threatening to label it a terrorist organisation, though the members of the leaderless Antifa — the far left, anti-fascist collective — were merely protesting the police brutality in Minneapolis that ended the life of a 46-year-old African-American, George Floyd, pinned down to the ground by a White police officer, Derek Chauvin. All this was filmed by a bystander with the ubiquitous mobile camera. So far, the story is similar to that of everyday instances of police brutality all over the world, particularly closer home.

But what makes the US situation different is not just the response of the people who protested to safeguard their life and liberty, but the way the institutions responded. Chauvin was fired almost immediately from his job and was arrested within four days by the local police. He was charged with third-degree murder and manslaughter, which could fetch him up to 35 years of imprisonment. Attorney General William Barr, meanwhile, explained that the Department of Justice, including the FBI, was investigating to ascertain whether federal civil rights laws were violated. These are the checks and balances on authority that a truly free country offers its citizens.

The silver lining in the ghastly Floyd incident is the emergence of Houston Police Chief Art Acevedo as a hero among policemen, who wants to win hearts and minds without confusing kindness with weakness. He told his own President to shut up: ‘Let me tell this to the President of the United States on behalf of the police chiefs of this country, if you don’t have anything constructive to say, keep your mouth shut.’ A nation becomes a world leader when it puts in place systems which offer organisational integrity and immunity that empower even a city police chief to call the presidential bluff. India has a lot to learn from Antifa and Acevedo.