Start of a new chapter beyond Rohtang 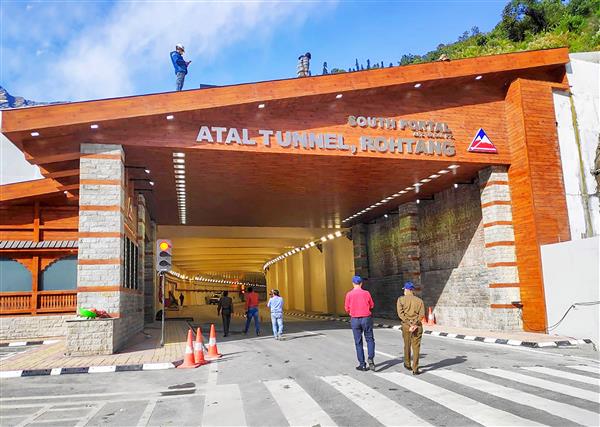 The inauguration of the strategically important, all-weather Atal Tunnel in Himachal Pradesh marks the realisation of a decades-long project, once considered too difficult to be implemented. The highest-altitude tunnel in the world and one of the longest in the country, it is nothing short of an engineering marvel of which the Border Roads Organisation, other agencies, contractors and the expert workforce can be justifiably proud. The feasibility study was first done in 1990, 10 years before the decision to construct the 9.02-km double-lane tunnel below the Rohtang Pass was taken when Atal Bihari Vajpayee was the Prime Minister.

It would take 15 minutes on an average to travel from the south portal of the horseshoe-shaped tunnel, located 25 km from Manali, to the north portal in Sissu, Lahaul valley. Designed for daily traffic density of 3,000 cars and 1,500 trucks, it reduces the road distance by 46 km between Manali and Leh and the travel time by four to five hours. The tunnel is a defining moment for the intensive Central push towards better border connectivity. Though it has the potential to link Ladakh to the rest of the country all 12 months of the year, as it would bypass Rohtang Pass that is snowbound during the winter, passes like Thanglang La and Baralacha La can still cut off road access to Leh in extreme weather conditions.

The immediate change would be felt in Lahaul and also Spiti valley, as the tunnel promises to transform the winter cut-off existence patterns. For the locals, however, the significance of the tunnel opening is also riddled with apprehensions of hectic trade and business activity threatening the traditional ways of life in the serene and remote mountain areas. While exploring the tunnel as a huge business opportunity for the travel industry, the Himachal government would face a challenging time regulating and educating tourists. Going by the reckless expansionist experience in Manali, maintaining an ecological balance and cultural sensitisation should remain the top priority.