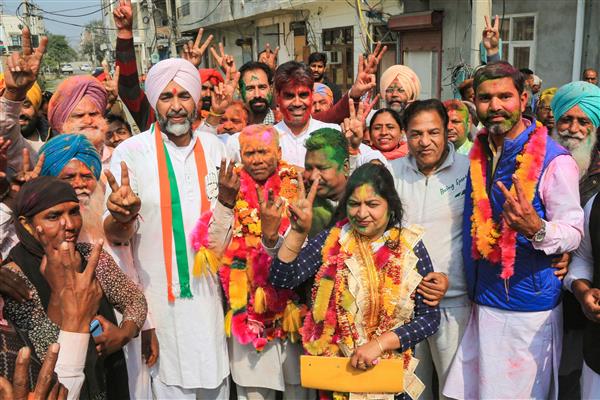 Riding majorly on the wave of goodwill earned by the farmers protesting against the new agriculture laws on Delhi’s borders since November, the Congress in Punjab has romped home to a massive victory. With seven municipal corporations and nearly 100 of the 109 municipal councils and nagar panchayats in its bag, the Congress is firmly in the saddle. Over 71 per cent of the electorate turned out to stamp their preference in the largely peaceful urban local body polls held on February 14. While the SAD is a distant second to the Congress, the BJP and AAP — the other two major contenders — find themselves routed and pushed further to the fringes.

The writing was on the wall for the BJP from the beginning. The shadow of the farmers’ stir — that has a groundswell of support from all sections of people — loomed over the election campaigning as the saffron party and its workers faced public wrath. Sensing an alienation from the masses, its long-time ally, SAD, had already broken ties with it a couple of months earlier. Public ire translated into the defeat of the ruling BJP-JJP in the neighbouring Haryana too when it lost two of the three mayoral seats and all three posts of municipal committee president in December-end. Bucking the general trend of the ruling party emerging as the winner, the political shift in Haryana was a pointer to the party losing ground. The Punjab poll outcome has dented any hopes that the BJP may have nursed of making a comeback in the state.

Similarly, SAD and AAP need to sharpen their strategies aimed at the progress of Punjab to reconnect with the masses and win back their trust. For, the next acid test — the Assembly election — is due next year. Meanwhile, with 50 per cent seats reserved for women for the first time in the civic body polls in Punjab, the onus of improving the wards lies equally on the new (and veteran) women councillors and mayors as the male representatives. It’s time they exerted their power and not be mere puppets of their menfolk.