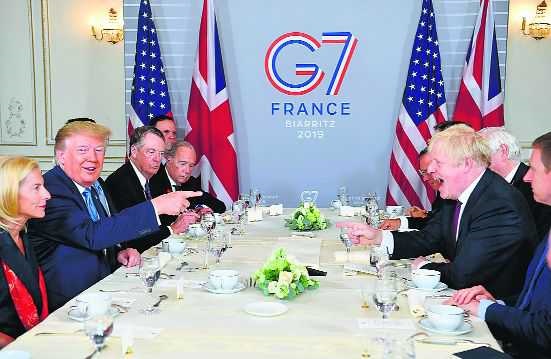 Keen on a bigger league of nations to corner China over the coronavirus crisis, US President Donald Trump wants India, Russia, Australia and South Korea on board the expanded Group of Seven (G7). Desperate to put his re-election campaign back on track, Trump is under immense pressure — domestically as well as internationally — to turn the screw on China for its alleged mishandling of the pandemic that has ravaged America. The fact that he has picked India among the potential entrants shows that New Delhi, with its ever-growing clout in the global arena, has a key role to play in the post-pandemic world order. With China resorting to muscle-flexing along the Line of Actual Control, the US sees India as a ‘natural’ ally. But India can’t expect long-term gains if it is included in this comity of nations solely for the purpose of isolating China. New Delhi should watch its own interests first and insist on a mutually beneficial as well as sustainable engagement. It is vital for India to be recognised as a significant force not only by the US but also by the other G7 members — UK, France, Germany, Italy, Canada and Japan.

Trump’s wish to bring Russia back in the group is consistent with his repeated acknowledgement of Moscow’s global strategic importance and an inclination to shed the Cold War baggage. Russia had been expelled from the then G8 in 2014 after it annexed the Crimea region from Ukraine. With the territory still under Russian control, America will find it tough to build consensus within G7 on the country’s readmission. As Sino-Russian ties are skewed in China’s favour, Washington senses an opportunity to mend fences with Moscow and possibly gain the upper hand in the current global tussle for supremacy.

Whether India and Russia become part of the group or not, the two traditional friends — who are also China’s neighbours — should strengthen their relationship. It’s a cause for concern that India and Russia are emerging as the new Covid-19 hotspots in the world. This development makes it all the more imperative for both nations to enhance cooperation and help each other weather the storm.