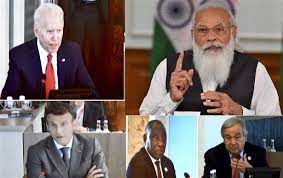 Being the first face-to-face meeting between the leaders of seven affluent democracies after the outbreak of Covid-19, much was expected from the Group of Seven (G7) summit in terms of addressing the globally critical issues of overcoming the ongoing pandemic, preventing future ones and fighting climate change. However, the Cornwall event flattered to deceive. The grouping — comprising the US, the UK, Canada, France, Germany, Italy and Japan — promised to provide 1 billion doses to vaccine-starved countries. This figure is well short of the 11 billion doses the World Health Organisation says are needed to vaccinate at least 70 per cent of the world’s population to put an end to the pandemic that has claimed over 3.8 million lives worldwide so far. The disappointment at this insufficient allocation was articulated by former British Prime Minister Gordon Brown, who said the lack of a more ambitious vaccination plan was ‘an unforgivable moral failure’.

India, a special invitee to the summit, used the platform to seek the support of the grouping on lifting patent protections for Covid-19 vaccines. Building international consensus on this issue is a key step towards ensuring equitable access to vaccines globally. New Delhi also rightly reminded the G7 of its unfulfilled promise of delivering $100 billion annually to climate finance. The governments of the seven countries had made a pledge at the United Nations in 2010 to do the needful, only to drag their feet later.

On the climate crisis, the G7 has come up with the ‘Build Back Better for the World’ plan that promises to offer financing for infrastructure in developing countries to help expedite the global shift to renewable energy. Projected as a green alternative to China’s Belt and Road Initiative, it is being seen as a belated move in the run-up to the UN Climate Change Conference (COP26) to be held in November. There have been enough of slogans and optics. The seven nations must lead the way with concrete actions to demonstrate their commitment to safeguarding global health and environment. After all, it’s a race against time to protect our fragile planet.