Guns from the east

Proliferation of illegal firearms in Haryana 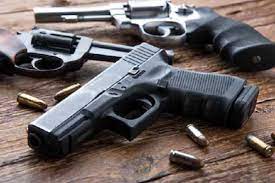 SINCE January, Haryana has witnessed a sharp surge in confiscation of illegal firearms, from ‘desi kattas’ to relatively sophisticated guns, which can be traced to the badlands of Uttar Pradesh and Bihar. Reports say that apart from criminals and gangsters, those sourcing guns from UP and Bihar include ‘normal’ individuals who wish to possess guns for personal security or to simply flaunt them. The increase in circulation and seizure of guns in Haryana could also be linked to the pending panchayat elections in the state, which have been delayed due to the Covid-19 pandemic. Apart from use by local criminals and musclemen, proximity to the national capital and the border state of Punjab too makes Haryana being used as transit for gun runners.

In Jhajjar district alone, the police registered 128 cases under the Arms Act this year, arresting 135 individuals and seizing 138 guns. In 2020, as per National Crime Records Bureau data, 2,427 illegal firearms were seized in Haryana, out of 67,947 across India. Haryana’s number seems tiny when compared with 32,776 for UP, the hub of illegal arms manufacture, with the highest number of crimes committed with firearms. The production of illegal firearms surges when elections approach, as happened before this year’s panchayat elections in UP. With rising demand in neighbouring states, illegal weapons find their way to criminals in states such as Punjab, Delhi and Haryana.

It’s a well documented fact that the UP-Bihar region is the centre of illegal gun manufacturing in India, yet the situation has not changed over the years. If anything, the demand only seems to be increasing. One factor behind the failure of law-enforcement agencies to stamp out this industry is the nexus between the political class, hired musclemen and criminals — politicians often depend on gun-wielding henchmen for influence, especially during elections. The story of the flow of illegal arms from UP and Bihar is so old, it’s enough to make right-thinking individuals lose hope. For the sake of the safety of its citizens, the Central and state governments must urgently work in unison to tackle this menace.