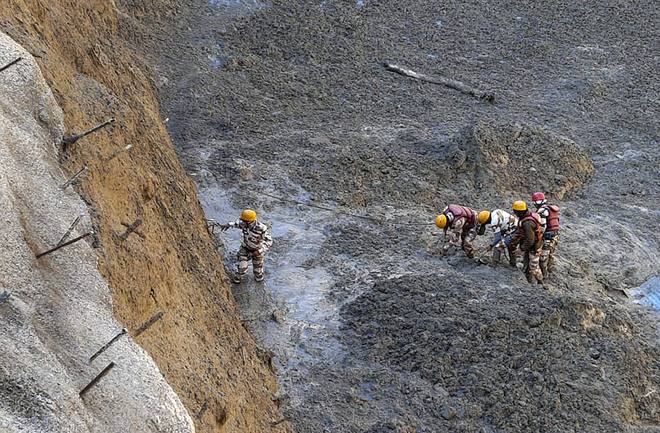 The circumstances may have been different, but Sunday morning’s devastation in Chamoli district of Uttarakhand drew instant comparisons with the 2013 flash floods. If mindless construction in an ecologically fragile ecosystem was considered a key contributor then and continues to be a subject of much concern, the latest Himalayan tragedy is also a reminder of how close to home the frontier of climate change and global warming is. While a glacial lake outburst appears to be the likely reason, it would be a while before experts can come up with definitive explanations about what led to the sudden surge of water, and the part played by several underlying factors.

Given the hill state’s history of natural disasters and the vulnerabilities red-flagged by locals and environmental activists over and over again, what emerges is a widening mismatch between the model of development championed by governments and the need to preserve land and water resources. Ironically, Raini, the village where disaster struck, was the cradle of the Chipko movement initiated in the 1970s to save trees. Commissioning of large hydro-power projects, involving storage structures and dams, and the resultant ecological impact is a divisive issue; the benefit-versus-loss debate has no clear winners. There are over 50 such projects that are operational, being built and proposed in Alaknanda and Bhagirathi basins. A safety and viability audit would, expectedly, be in the works, along with a rethink on bolstering the mitigation mechanism.

A majority of the glaciers in the Himalayas are known to be receding, leading to the formation of several proglacial lakes. The climate change hotspot would require a generous dose of resources to monitor the region better and recommend policy changes. The course correction hopefully would be more effective than the cold treatment to suggestions, by a 2014 committee constituted by the apex court, to turn down the proposals to build hydel projects above an altitude of 2,000 metres, citing various risks.