Joshimaths in the making : The Tribune India

Save Karnaprayag, McLeodganj before it’s too late 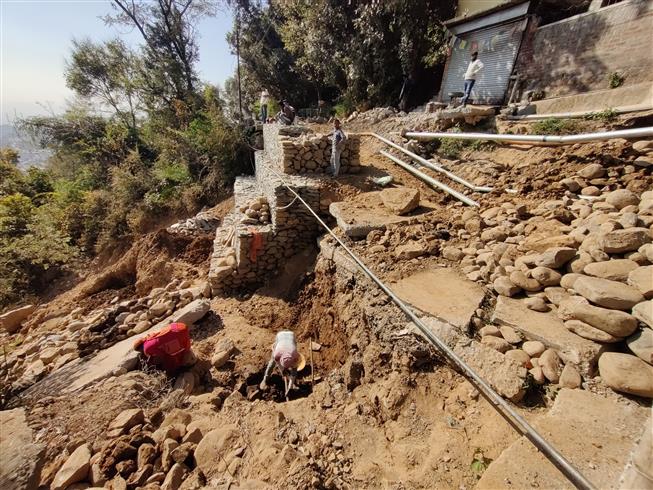 Rampant construction activity in callous disregard for the red flags and warnings flashed by geologists ever since land sinking was first noticed 50 years ago in Uttarakhand’s strategically located, ecologically fragile and landslide-sensitive zone in which Joshimath is located has come at a great cost. It has claimed a large part of the town, causing irreversible damage. Even as the authorities are trying to prevent an ominous human tragedy by evacuating the affected residents to safety, cracks have appeared in some houses at Karnaprayag, another municipality of Chamoli district, triggering fears of land subsidence there too.

Meanwhile, the unfolding Uttarakhand disaster — sadly a manmade and preventable one — has put the spotlight on a similar hazardous situation prevailing at McLeodganj in the neighbouring Himachal Pradesh. The alarm bells are ringing loud as attention is directed towards the increasing occurrences of landslides, sinking of the main McLeodganj-Dharamsala road, the recent cave-in of a market and the yet-to-be-rectified drainage system. Urgent heed must be paid to these warning signs to avoid another Joshimath.

The Joshimath land subsidence underscores the imperativeness of preventive measures. Nature must be respected; it is only in its protection and sustainability that humans can survive. If the balance is tilted in favour of ‘development’ and ‘progress’, things cannot last for long. Hundreds of houses, hotels and roads are to be razed in Joshimath due to its foundational land subsiding and becoming incapable of carrying the weight of the buildings that have proliferated there. Declared as an unsafe zone, it will deprive around 30,000 people living in nearly 700 houses, identified as dangerous so far, of the emotional security of having a home. The government authorities are conducting a massive rescue and relief operation as the affected families are being shifted to temporary relief camps and compensated for their loss. But can there ever be enough recompense for people suffering that sinking feeling one gets when one is rendered homeless? The only way out is learning a lesson and preventing more such tragedies.