Ambala villages show the way out of stubble-burning 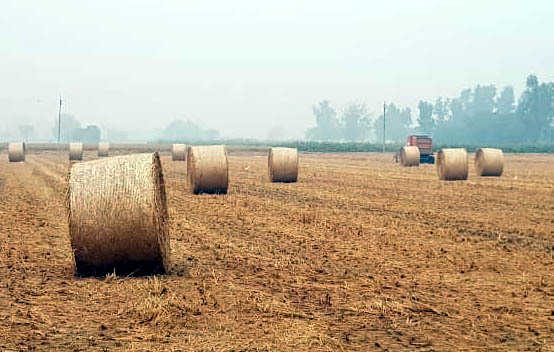 Even as the paddy kharif crop is being sown, Ambala has taken the lead in managing the straw, the troublesome byproduct of rice plantations, in an environment-friendly manner. It is an exemplary and timely move aimed at giving the farmers the much-needed viable option to refresh their fields for the rabi crop after paddy is reaped and shun the abhorrent polluting practice of disposing of the stubble by burning it. The strategy is to sell the residual straw generated in the villages of Ugara and Bara to a private firm engaged in the production of power from paddy straw for a sugar mill in Naraingarh. The scheme should bear fruit as it takes care of the main hurdle to the farmers’ reluctance to stopping the noxious burning till now: the huge costs involved. The firm will bear the cost of baler machines and transportation. Given that about 4.1 lakh tonnes of paddy straw is generated in Ambala every year, both the peasantry and the company are eyeing earnings of Rs 1,000 per acre from this deal.

The plan is designed for a triple impact. Not only do the farmers stand to profit from the pact, but it also serves the necessity of preserving soil health and ecology. Plus, immeasurable are the resultant long-term benefits to be accrued to the health of the people of the affected area — spread as far as Delhi — as they will be saved from the bane of breathing polluted air. The plight of crores of people gasping for clean air has even moved the Supreme Court into reprimanding the governments of Haryana and Punjab for not taking enough measures to address the burning issue.

But rather than drawing well-planned steps to fight the problem, the governments have been resorting to knee-jerk reactions or imposing penalties on erring farmers despite their ineffectiveness to yield the desired results being evident over the years. As smog-laden air bogs down the populace every season, Punjab, Haryana, Delhi and Uttar Pradesh conveniently sidestep the problem by indulging in blame game. Taking a cue from the Ambala experiment, the CMs of the four states need to brainstorm together and evolve a plan to preempt another bout of air pollution.