A grand opportunity to be PM candidate beckons Bihar CM 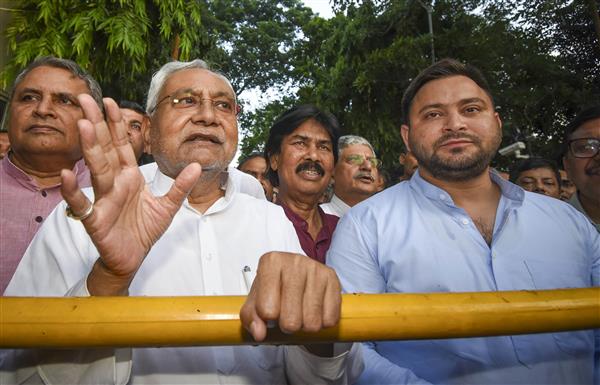 INDIAN politics has never been synonymous with morality. And when it comes to opportunism, there are few who go the whole hog better than Bihar Chief Minister Nitish Kumar. A past master at striking the best deal for himself and his party, the Janata Dal (United), Nitish has dumped the BJP again and returned to the Rashtriya Janata Dal (RJD)-led Mahagathbandhan to form a new government. Nitish had managed to remain in the saddle despite the JD(U)’s below-par performance in the 2020 Bihar Assembly election. His party had won only 43 seats, well behind the BJP (74) and the RJD (75). With the BJP having the upper hand in the alliance, Nitish had no qualms about settling for a diminished stature as the CM. However, the saffron party’s overbearing presence proved too hot for him to handle; finally, he opted for Plan B in a desperate bid for his political survival.

Ironically, not much is expected to change in terms of Nitish’s role, alliance dynamics or Bihar’s governance. The numbers are still stacked against the JD(U); its current ally, the RJD, will spare no effort to dictate terms. Lalu Yadav’s party, whose rule was marked by rampant corruption and lawlessness in the state, is set to keep Nitish on his toes. Sooner or later, he will again find himself pushed to the brink. And he will also have the BJP, with its ego bruised by his brusque departure from the NDA, snapping at his heels.

What does Nitish’s latest U-turn mean for the beleaguered Opposition? The entry of a senior leader who has dared to take on the BJP can act as a trigger for the Congress and its allies to regroup and close ranks in the run-up to the 2024 Lok Sabha polls. However, the Bihar CM needs to overcome heavy odds to emerge as the tallest leader in the Opposition camp. How the old warhorse tackles multiple challenges — running a coalition government, keeping the JD(U) flock together and propping up an anti-BJP national front — will have a decisive bearing on his political future.