On a sticky wicket

Govt can no longer brush aside protests against farm Bills 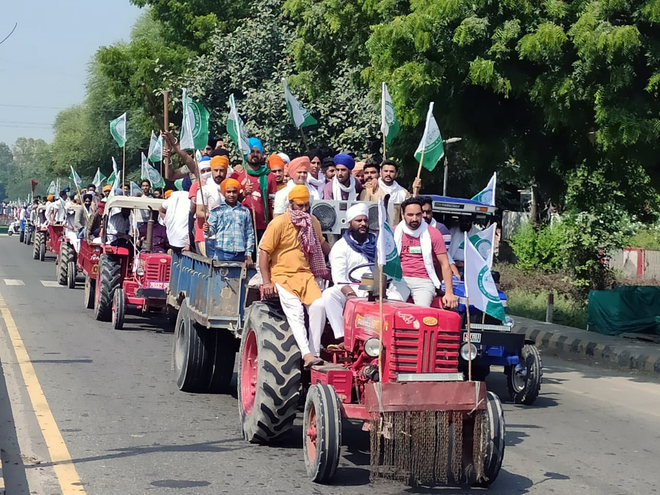 Farmers carried out a tractor march at Ferozepur on Friday to protest against the farm Bills.Tribune Photo

The impact of Friday’s Bharat Bandh, called by farmer organisations in protest against the hastily passed farm Bills, was felt the most in grain-surplus states such as Punjab and Haryana. In other states too, be it UP, West Bengal or Telangana, the protesters managed to hammer their point home: they are in for a long haul and the NDA government can no longer dismiss their agitation as being politically motivated. Unmindful of the worsening situation on the ground, Union Agriculture Minister Narendra Singh Tomar and other BJP leaders have been accusing the Congress-led Opposition of misleading the country on the Bills. Instead of addressing the farmers’ genuine concerns, the government has been busy patting itself on the back for initiating ‘historic’ reforms in the agriculture sector. The communication gap and the trust deficit have only widened in recent weeks.

The significance of the farming community as a vote bank is not lost on any political party, least of all the BJP, which has won two Lok Sabha elections in a row by huge margins. Still, the ruling party has been adamantly defending the flawed Bills. On Friday, PM Narendra Modi reiterated that small and marginal farmers, who account for 86 per cent of the population that survives or thrives on agriculture, would benefit the most from the reforms. Ironically, it’s this major chunk that is fearing a wipeout if the new laws come into force.

The contentious Bills were first promulgated as ordinances in early June. Voices of dissent were heard sporadically during the three months preceding the start of the monsoon session of Parliament, but the BJP did not pay heed to them. No wonder the party today finds itself under ever-increasing pressure to revoke the ‘anti-farmer’ laws. The PM has said it’s the ‘responsibility and duty’ of all party workers to save farmers from ‘rumours’ and explain to them the importance of the agricultural reforms. Had this exercise been initiated in June itself, the BJP might have eventually succeeded in developing consensus on the matter. Now, nothing less than a climbdown by the government would placate the farmers.