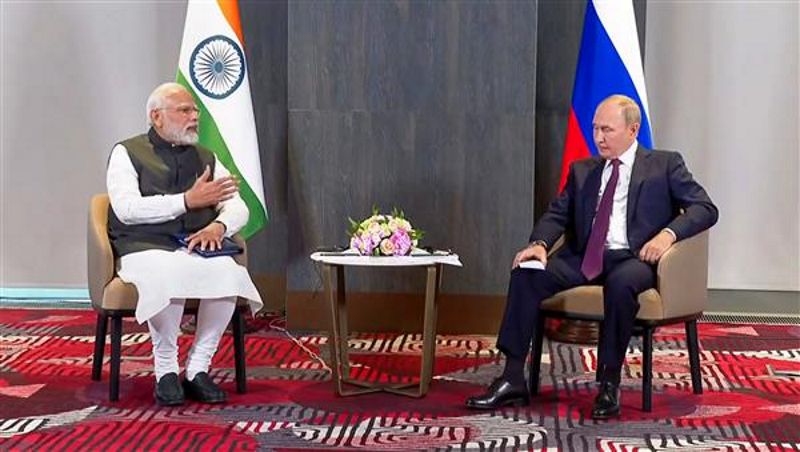 Prime Minister Narendra Modi interacts with President of Russia Vladimir Putin during a meeting on the sidelines of SCO Summit, in Samarkand. PTI file photo

PM Narendra Modi caused a stir last week when he publicly expressed his concerns over the Ukraine conflict. With Russian President Vladimir Putin seated beside him in Samarkand, the PM said he knew that today’s era was not of war and flagged the problems of food and fuel security, and the fertiliser shortage confronting developing countries. The PM’s concerns over the impact of the Covid pandemic and the Ukraine conflict are legitimate. At the same time, his subsequent observations hardly suggest that India wants to distance itself from Russia. For, the PM also said that India ‘valued this relationship’ and ‘the world also knows that it is an unbreakable friendship’. It was in sync with his September 7 speech advocating stronger ties with the Russian Far East and the Arctic.

There have been other straws in the wind. After abstaining earlier, India surprisingly voted against Russia in the last UNSC meeting on Ukraine. India has also twice spoken on the Bucha massacres, uncovered in April after the Ukrainian forces had wrested a Russian town. India will be compelled to take a similar stance when the UN will inevitably take up the issue of mass civilian graves in Izyum, a town recently taken by the Ukrainians. After the Russian retreat in Kharkiv and Chinese President Xi Jinping’s ambiguous stance at Samarkand, the optics don’t look good for the Kremlin.

But for New Delhi, there has been no looking back on Indo-Russian trade. In the strategic domain, Russia continues to build Kudankulam nuclear power plant’s units; S-400 missile defence system supplies have continued. India is also acutely aware of the continuing need of Russia as an all-weather friend despite its own growing strategic closeness with the US. Washington’s policies for the region have vacillated and recently, it resumed its dalliance with Pakistan. Notwithstanding the sabre-rattling, its trade with China has risen. PM Modi’s ‘no war’ remark may have tickled the vanity of some players in the West, but toxicity is unlikely to colour India’s viewing of Russia in this unsettled global milieu.