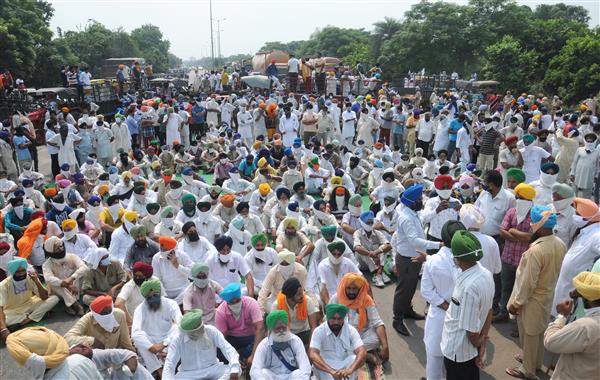 Punjab, the epicentre of the protests against the new farm laws, seems in for the long haul regarding a potential legal battle with the Centre. The Capt Amarinder Singh government presented three Bills in the Vidhan Sabha on Tuesday in a bid to bypass the Central Acts, three weeks after Congress president Sonia Gandhi had asked party-ruled states to negate the agriculture-related laws by passing their own legislations. The state Bills — which require the assent of the constitutional authorities to come into force — seek to counter the Farmers’ Produce Trade and Commerce (Promotion and Facilitation) Act, the Farmers (Empowerment and Protection) Agreement on Price Assurance and Farm Services Act, and the Essential Commodities (Amendment) Act. According to one of the Bills, no sale of paddy and wheat in Punjab will be valid unless the rate of payment is equal to or above the MSP. There is a provision for imprisonment of not less than three years and a fine for the sale or purchase of produce below the MSP.

The agitating farmers’ main apprehensions are that the Centre wants to do away with the tried-and-tested MSP regime and leave them to fend for themselves before the corporates. The Union government has largely failed so far in allaying these fears and convincing the farmers of the benefits of the new legislations. The Bills and the resolution unanimously passed by the Punjab Vidhan Sabha are not only aimed at placating the farming community but also to score political brownie points, with the state going to the polls in early 2022.

With agriculture listed as a state subject in the Seventh Schedule of the Constitution, the non-BJP-ruled states have been accusing the Centre of enacting the laws without bringing them on board. The trust deficit has only widened ever since the ordinance route was adopted in June to propose sweeping reforms in agriculture — the lone sector which held its own during the crippling nationwide lockdown. The Centre-state tussle threatens to impede agricultural operations, an unwelcome scenario that can delay economic recovery, unless a middle ground is found sooner than later.