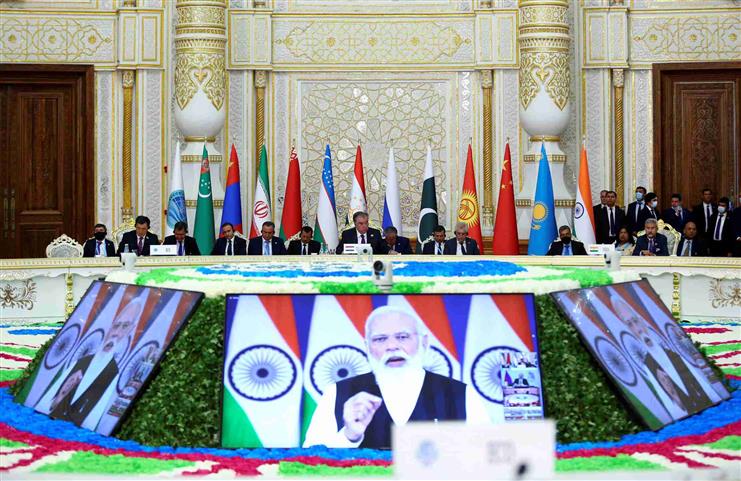 INDIA has sent invitations to all members of the Shanghai Cooperation Organisation (SCO), including Pakistan and China, for the foreign ministers’ meeting to be held in Goa in May. - File photo

INDIA has sent invitations to all members of the Shanghai Cooperation Organisation (SCO), including Pakistan and China, for the foreign ministers’ meeting to be held in Goa in May. The invite to Pakistan Foreign Minister Bilawal Bhutto Zardari and his Chinese counterpart Qin Gang signals India’s intent to reach out to two neighbours with whom its relations have remained strained in recent years. It was only last month that Zardari had made adverse remarks against Prime Minister Narendra Modi on the sidelines of the UN Security Council meeting, shortly after Foreign Minister S Jaishankar aptly described Pakistan as the epicentre of terrorism. In a sharp reaction, India’s Ministry of External Affairs had termed Zardari’s comments an ‘uncivilised outburst’ and a ‘new low’ for Pakistan.

It’s a smart diplomatic move by India to invite Zardari in the backdrop of his objectionable remarks. New Delhi has put the ball squarely in Islamabad’s court. Pakistan has to decide whether to send Zardari or somebody else to represent the country at the SCO meeting. No Pakistan Foreign Minister has visited India in the past over a decade; Hina Rabbani Khar was the last to do it in 2011. In another sign of its conciliatory approach, India has invited Chief Justice of Pakistan Umar Ata Bandial for the meeting of Chief Justices of SCO nations, scheduled for March.

India’s credible overtures are in stark contrast to Pakistan’s flip-flops. Pakistan PM Shehbaz Sharif’s recent offer for the resumption of talks came with the rider of restoration of Article 370 in J&K. This precondition is unacceptable to India, which has repeatedly ruled out dialogue unless Pakistan stops supporting cross-border terrorism and refrains from meddling in India’s internal matters. New Delhi’s relationship with Beijing, too, suffers from trust deficit. Qin Gang, China’s new Foreign Minister, said recently that ‘both sides are willing to ease the situation and jointly protect peace along their borders.’ China has been reluctant to walk the talk, but that hasn’t deterred India from keeping all lines of communication open. The SCO invites are in sync with India’s pragmatic approach to foreign affairs.