Total ban, govt action are ways out of polluting crackers 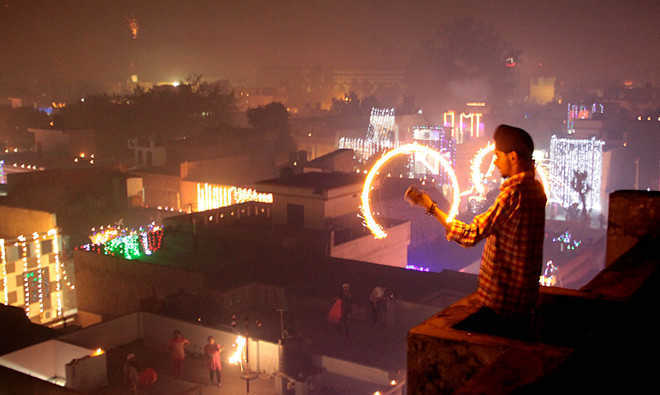 There is damning evidence of the air quality falling to hazardous levels due to various factors at the onset of winter every year as smoggy haze blankets the skies. It is seen in the aggravating condition of patients with breathing and pulmonary problems as they pant for clean air. Yet, pitifully in the debate — that has become an annual farcical feature — on whether a blanket ban be imposed on the bursting of crackers during the festive season encompassing the pujas, Dasehra, Diwali, Gurpurb, Christmas and New Year, noisy arguments in favour of the crackers seem to dull the voice of saner rebuttals. In disregard for the patients’ plight as well as the degrading impact of air pollution on the environment, court and green tribunal rulings prohibiting the sale and use of crackers are sought to be tweaked or overturned. Citing culture, freedom, ‘green’ crackers and the livelihood of the multi-crore firecracker industry workers, most authorities relent, with such policies as ‘allowing a two-hour window for green crackers’.

However, this green signal is seldom green or followed to the T and the lame intent goes up in smoke as the indiscriminate bursting of crackers plays havoc with air. Lack of exemplary penal action goads the offenders to have ‘fun’ at the expense of the sick whose problems worsen. Especially so, in these Covid times. How ‘green’ the crackers are has been disputed by experts. Even the ‘greenest’ of them emit just 30% fewer pollutants. The QR code on crackers intended to unravel their quality by displaying if they contain banned poisonous chemicals barium, arsenic, lead etc has been neither propagated nor implemented in totality.

This year, some states are showing the way by imposing a ban on crackers. Public will, demonstrated by shunning crackers and celebrating festivals by lighting diyas and adopting other eco-friendly modes at an individual level, is equally essential. Every little step matters as India, home to some most polluted cities of the world, faces the colossal task of controlling the mix of industrial gaseous effluents, construction dust, vehicular emissions, farm fires and, yes, firecrackers.