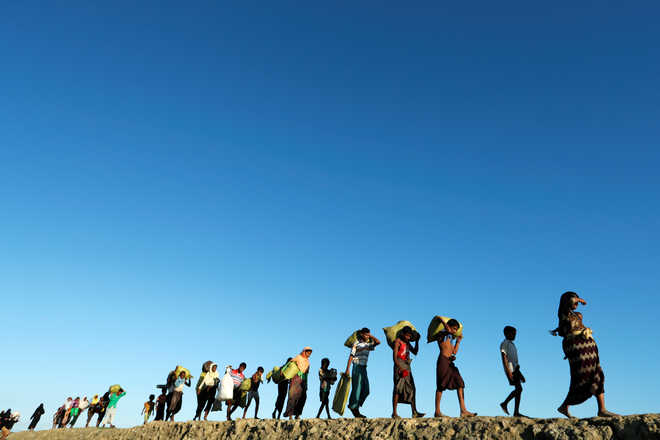 Red-faced over the criticism of its March 26 order to the deputy commissioners of border districts to ‘politely turn away’ the fleeing Rohingya, the Manipur Government has hastily sought to undo the damage. Projecting a humanitarian visage, it has withdrawn the directive that was ostensibly aimed at preventing illegal immigration. Annulling the order — that also prohibited food and shelter to the persecuted refugees — Manipur laid emphasis on how the state is giving medical aid to the injured refugees who had fled Myanmar after last month’s bloody military coup. Incidentally, neighbouring Mizoram, which has seen an influx of Myanmar nationals, has been giving them shelter.

The issue has been simmering since 2016-17 when lakhs of Muslim Rohingya began escaping the torture in their country, which the UN has accused of ‘ethnic cleansing’. Many of them have crossed into India. With a number of bilateral infrastructure projects tied to it, Myanmar is an important link in India’s Look East Policy. The Centre needs to break its silence and give clear instructions on the course of action to be taken by the affected states so as to avoid any more faux pas. It is a complicated subject with implications of a demographic shift — as feared in Assam — and the capacity of India to absorb and help the needy refugees at the cost of ensuring the depleting resources to its own citizens.

In this regard, all eyes are on the Supreme Court which is looking into a related case. On March 27, a Bench led by Chief Justice Bobde reserved its order on a plea seeking the release and protection of around 150 Rohingya detained in a Jammu centre. These immigrants are being identified as illegal immigrants so as to deport them to Myanmar. Significantly, the SC had dismissed an earlier similar petition seeking the retention of some Rohingya in Assam over the genocide in Myanmar. Even as international humanitarian conventions call for giving shelter to persecuted minorities, the MHA has told the SC that their stay is illegal and fraught with serious national security ramifications.