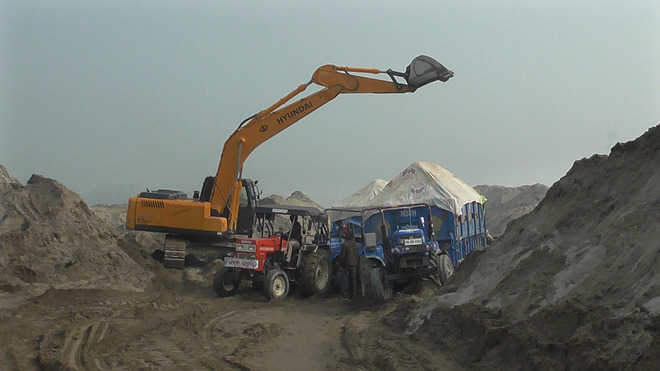 Two instances of the past fortnight give an encouraging glimpse of efforts to contain the menace of illegal sand mining in the Yamunanagar area. Alert local residents and river activists have red-flagged the authorities about two firms indulging in this environmentally hazardous activity. The two errant companies have been booked for the violations. But the law enforcers need to use the evidence of the incriminating pictures and videos to tighten the screws on the culprits and conclusively nail them. The visuals of deployment of heavy machinery to build unauthorised embankments and divert the natural flow and course of the river to extract the precious sand must not go in vain. Illegal extraction of sand along the Yamuna has been plaguing the region for years. Hundreds of acres of the river basin have been plundered and its rich ecosystem irreversibly affected.

The absence of due punishment — a sore point with the residents and campaigners — has driven the dredgers to continue with the illicit act with impunity. Stringent strictures of the NGT and the Supreme Court, aimed at curbing the adverse impact on the ecology and aquatic biodiversity, don’t seem to have deterred the sand mafia that is allegedly flourishing with political and official patronage. The shocking visuals and citizen activism have left the authorities red-faced. If the mafia still manages to manoeuvre its way out of the tight spot, it would be a great disservice to the efforts of well-meaning champions of social change. The trial should be fast-tracked; tardy probes, low conviction rates and little disciplinary action spur the money-minting practice of mining sand worth crores at the cost of the exchequer.

A related recent report that has a direct bearing on the future of our children lends weight to the urgent need to end this exploitation of a precious resource that is causing immense environmental damage to the flora and fauna in and around the riverbed. Unless sustainable sand mining is conducted, the projection of the Worldwide Fund for Nature’s Water Risk Filter that Delhi, Ludhiana, Chandigarh, Jaipur and Amritsar face a very high water risk in the next few decades may become a reality much sooner. A scary scenario, indeed.