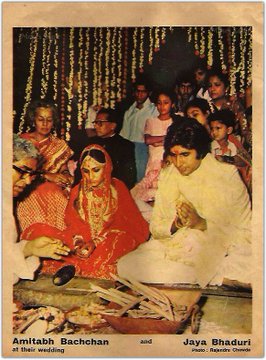 On his 47th wedding anniversary, Amitabh Bachchan has shared the story behind his marriage with Jaya Bhaduri, which happened shortly after the success of the duo's 1973 release, "Zanjeer".

While the Prakash Mehra directorial hit theatres on May 11, 1973, Amitabh and Jaya tied the knot less than a month later on June 3.

The veteran actor also shared photographs from their wedding mandap where he can be seen applying vermilion on bride Jaya's forehead as his father Harivansh Rai Bachchan recites a prayer.

Big B also took to his blog to talk about his wedding.

"The unending wheel of life keeps in rotation and in ever increasing motion .. 47 years ago it waited too for the beginning of the life for life .. the presence of the progress report surrounds us all as it strikes midnight .. there is the blessings of many .. and our gratitude for all.." he wrote. IANS