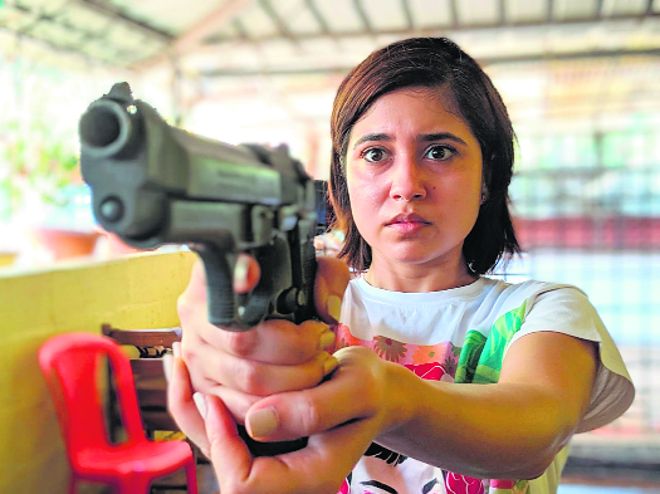 I want my work to be seen right from Bihar to Boston.” An empty boast! But when the actor in question is Shweta Tripathi Sharma whose roles are as varied as her dreams to touch new horizons, you know she means business.

In an industry where younger women are made to play older parts, where actors are neatly stacked into boxes, she defies more than one norm. Her age-defying looks ensure she can easily walk into the part of a 14-year-old (Haraamkhor). Her acting prowess leads her from the sweet and decent Shalu of Masaan to gun-wielding Golu in the second season of Mirzapur. Reasons for saying yes to Mirzapur were the same as she would have for giving a nod to any other project —quality content.

Never mind that season one of Mirzapur didn’t quite hinge upon her, she knew with many of the primary cast members dying in the first one, she would get to flex more than one acting muscle in the second outing. Patting the writers for fleshing out such a nuanced character, she says. “An actor has to stretch oneself.” Of course, the real Shweta, daughter of a retired IAS officer, is markedly different from the many onscreen avatars of her.

Stepping into a range of parts, this year we saw her in Cargo and in Raat Akeli Hai, she once again rubbed shoulders with Nawazuddin Siddiqui. Reuniting with her Haraamkhor co-actor Nawazuddin, we wonder if there was a greater comfort level this time around. She says, “When an actor is of the calibre of Nawaz, there is comfort in the very first scene only. Nawaz is not just one of my favourite co-actors, but also my favourite actor. Since he reinvents himself with each part, there is so much to learn from him. ”

For her, acting is a whole lot of research too. As she prepares to play Banaras-based characters in two different web series, she reasons, “Now I am not going to start staying in Banaras.” But, yes, she can talk to her friends, read what she can lay her hands on, watch South Indian films, where heroines don’t wear heavy-duty make up and are more real.

Web certainly allows actors the freedom to be and also takes off the pressure of box-office numbers which she doesn’t understand at all. Between OTT platforms and the big screen, the medium doesn’t matter so much to her, “What is important is what I am saying rather than where I am saying it.” Post Masaan she may have declared, she would not do any more kissing scenes. Today she feels, “I don’t have a problem per se for at times kissing scenes are very important to storytelling. I object only if these are used to titillate the viewers or to make the trailer exciting.”

More than visible on the OTT platforms, she doesn’t think web space over-sexualises female parts. “I have not been asked to do anything I didn’t want to. But at the same time, we shouldn’t shy away from telling stories that we want to.” For her every project is like a relationship and you go into it with trust. “I always work with makers who listen.” And those who would care to listen to her; she proffers advice, “If you go around finding negativity that’s all you will ever encounter.”

Though she was affected by negativity not only in Bollywood but also the world which we inhabit right now, a la Harry Potter she managed to put a shield around her, both to retain her sanity and positivity. Marriage has certainly made her a more positive person. And the dreamer in her remains as wistful, dreaming of working with a Martin Scorsese, a Leonardo DiCaprio and doing a film like Jojo Rabbit. Tall order!

Only for this determined girl, who has made a mark in a remarkably short time, world is her oyster. But then, she defines success as the opportunity to choose. Well, she has reasons to be mighty proud of her choices.