'Bigg Boss 15': Will it be a lonely journey to finale for Tejasswi Prakash? 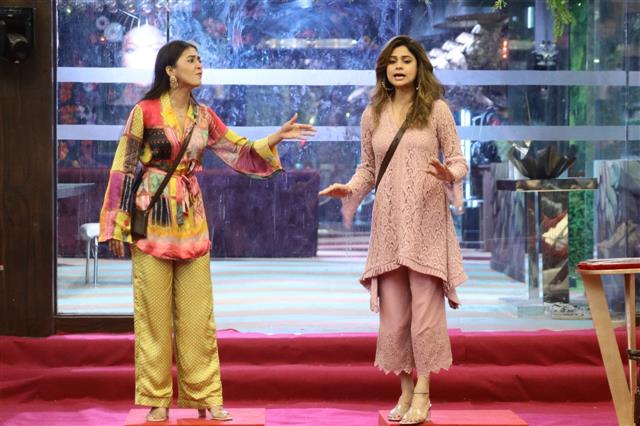 A still from the upcoming episode of 'Bigg Boss 15'.

As the game makes its dash towards finale, the contestants are churning through the most difficult phase on ‘Bigg Boss 15’. In the last episode, the NON-VIPs took each other on in a fiery battle of words to convince VIPs Umar Riaz, Karan Kundrra, Rashami Desai and Rakhi Sawant to give them the ‘Ticket To Finale’. In today’s ‘Bigg Boss Ki Adaalat’ task, all the friendships and relationships are put at stake as their fights get ugly.

Nishant picks up on Shamita for being a 'loudspeaker' of the house. Shamita swiftly retaliates to his taunt saying that Nishant’s disgruntled behaviour makes him the real ‘loudspeaker’. The VIPs point out that Nishant is being unfair and inconsistent in his criticism of Shamita, to which he angrily storms out of the room saying, "Tum log tumhari judgement galat kar rahe ho! Tum log paagal ho kya?"

While the debate between Shamita and Abhijit which turned out to be a fun banter previously, it takes a turn for the worse as Abhijit attacks her for being manipulative and plotting strategies to shrewdly eliminate other contestants from the house.

Meanwhile, the crack deepens in Karan and Tejasswi’s relationship, as Tejasswi feels victimised by the VIP judges for not letting her win the task. While judging her round of duel with Shamita, Karan favours Shamita over her, which hurts her. She breaks down in loneliness after feeling cornered by the housemates.

Actress and model Gauahar Khan has slammed Karan Kundrra for his comments on Tejasswi Prakash. She said he should look at his face and his reality is now apparently visible to everyone.

Shakal dekh apni , teri asliyat dikh gayi and so much more….. love = respect . Respect = Love . I felt very bad for teja ! 🤗🤗 wanted to hug her . To all the girls who are reading this , respect is super important, both ways . Please treat yourself with love n respect first !❤️

Will the blistering race to finale tear ‘TejRan’ apart?

Death toll reaches four in the mishap near Khooni Nallah in ...

Tourism boom in J&K due to scorching heat in the plains, not better situation in UT: Ghulam Nabi Azad

‘The people are fleeing to hill stations and are even ready ...