The new song is sung by Shreya Ghoshal and Tushar Joshi 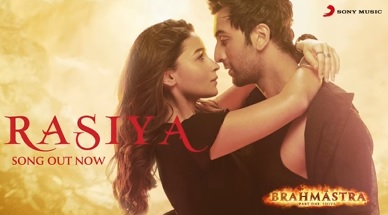 Singer Shreya Ghoshal and Tushar Joshi talk about the latest track 'Rasiya' from the Ranbir Kapoor and Alia Bhatt-starrer 'Brahmastra'.

Composed by Pritam Chakraborty, and lyrics penned by Amitabh Bhattacharya, the romantic track is picturised on the lead cast of the film.

Alia Bhatt also shared the song on her Instagram:

While talking about the track, Tushar, who is known for movies such as 'Chhichhore', said: "'Rasiya' was a sample track for the film and I am overwhelmed with the response and love that we are receiving for this track." "It's only due to the audience demand that this song is exclusively being released post the movie release. It has been a great experience to voice 'Rasiya' and I'm really excited about the release." Known for her songs in the films like 'Bachna Ae Haseeno', 'God Tussi Great Ho', 'Welcome to Sajjanpur' and many more, Shreya has also sung along with Tushar and she is happy that on public demand finally, the song has come out post the release of the film. She is also a great admirer of Pritam's compositions.

She added: "It has always been a delightful experience to work with Pritam Da. Being a part of the biggest movie of the year is special, and I am glad the full song is out now on popular demand." "I had a lot of fun recording the song. The track touches one's soul and I am certain that the audience will give immense love to 'Rasiya'." The musician also comments that he enjoyed composing the track and fans will surely appreciate it.

"I loved and enjoyed composing for 'Rasiya'. 'Brahmastra' album has topped charts globally and I am very hopeful fans will love Rasiya too." Singer-lyricist Amitabh, who rose to fame with his composition 'Emotional Atyachaar' in the film 'Dev D', said that it was an exciting experience and it is one of his favourite tracks from the film. "I'm excited and thrilled to be a part of this film. All the songs have crossed milestones in Indian cinema. 'Rasiya' is one of my favourites from the 'Brahmastra' album with powerful yet soothing lyrics," he concluded.