Deva Deva is the second song from the film 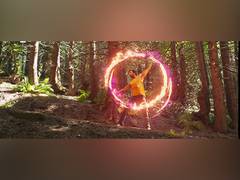 After love song 'Kesariya', filmmaker Ayan Mukerji, on Thursday, unveiled a teaser of the second song from his most anticipated film 'Brahmastra'.

Titled 'Deva Deva', the teaser video begins with Ranbir Kapoor, as Shiva praying to God. He is also seen explaining the importance of light to his love Alia Bhatt who plays the role of Isha in the film.

"It's what protects us when faced with any darkness," Ranbir said to Alia who plays the role of Isha.

The highlight of the teaser is Ranbir exploring his power of fire with megastar Amitabh Bachchan.

Sharing the teaser on Instagram, Ayan wrote, "DEVA DEVA Teaser. (And the rest of it - out on this coming Monday - the day of Lord Shiva) Deva Deva - was the first song to be composed for Brahmastra, capturing right away the Soul of Shiva's Journey in the movie ! It has given me so much Energy and Joy over the time it has been with us...And I'm really looking forward to finally sharing the feeling of this Song with everyone - on August 8th."

Alia, too, dropped the teaser on her Instagram feed and captioned it."The light is coming. Deva Deva song out on 8th August." The full version of Deva Deva will be out on August 8.

'Brahmastra' will release theatrically on September 9th, 2022, in 5 Indian languages - Hindi, Tamil, Telugu, Malayalam and Kannada. Amitabh Bachchan, Mouni Roy and Nagarjuna Akkineni are also a part of the project.