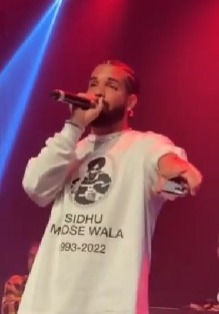 Canadian rapper-singer Drake paid another tribute to late Sidhu Moosewala during his latest concert in Toronto. He wore a t-shirt that had Punjabi singer’s picture along with his name printed on it. The t-shirt also had Moosewala’s birth and death year ‘1993-2022’ below his portrait.

A video from the event has gone viral on social media. In the video Drake says, “I’m here tonight, grateful, just as a kid who grew up wide-eyed. I’m a fan, I’m one of you tonight. I’m grateful to be from the greatest city in the world.”

Drake and Moosewala fans are touched by the gestures and they made sure express their shared it on social media with their comments of appreciation for the rapper.

Hats off to you #Drake with respect 🫡 This is the last level of success for an Indian artist 💫Legend never die ♾️❤️ #JusticeForSidhuMoosaWala https://t.co/2dUcr19ZGA

Rapper #Drake pays tribute to the late singer #SidhuMooseWala with a t-shirt at his concert. pic.twitter.com/536VZadYO7

#SidhuMooseWala #Drake 's infinite respect to the Legend is bcoz a true Artist can feel the real Artist's contribution to the music industry.

We are over the moon after this tribute. pic.twitter.com/CQhbLyS2An

It has been exact two months since Sidhu Moosewala was shot dead. He was brutally murdered on May 29 in Mansa district of Punjab.