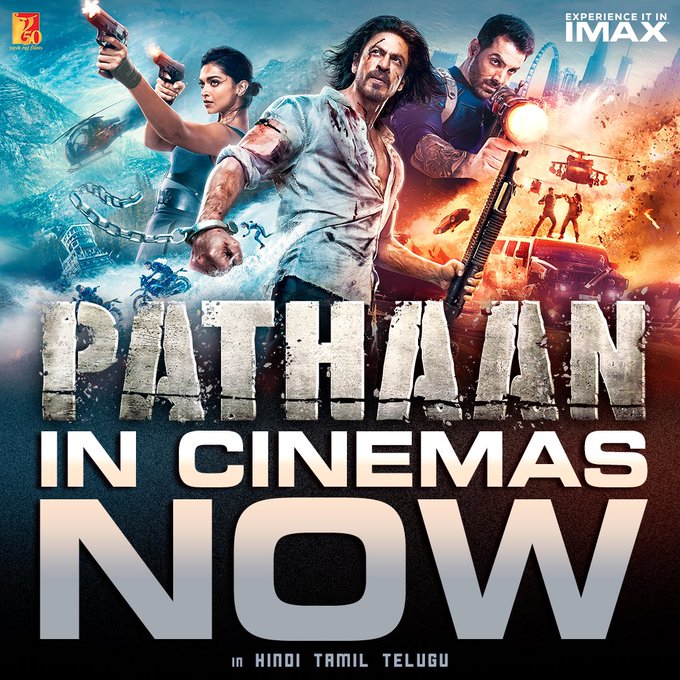 The audiences queued up from early morning, some groggy eyed with lack of sleep, others bright and brimming with enthusiasm at the start of a new day -- and a new Shah Rukh Khan film that bested boycott calls for a record opening.

"Pathaan" released on Wednesday in 5,000 screens across India and to 6 am and 7 am shows in several cities, including Delhi-NCR and Mumbai, with industry insiders hoping that the film signals not just the return of SRK the hero after four years but also the good times for the battered Hindi film industry.

It appeared to be back to the glory days at the 6.55 am show at PVR Select Citywalk with whistles, hooting and loud claps as the film unspooled.

Going by the decibel level at the almost full IMAX theatre, the superstar, who has had a string of flops with "Zero", "Fan" and "Jab Harry Met Sejal", is back.

"Simply Shah Rukh," exclaimed a young woman about why she skipped a few hours of sleep to catch the first show of the superstar's new movie even on a cold January morning.

She was among the hundreds of people gathered at the upscale South Delhi mall to watch the spy thriller. They waited patiently as their tickets were scanned at the counter.

Once inside, the wait continued for the film, directed by Siddharth Anand of "War" fame, to start. Many felt frustrated by the battery of advertisements screened before the main feature.

The first loud cheer came oddly when the CBFC certificate of "Pathaan" was displayed. And the celebratory mood continued for the next two hours and 26 minutes.

The Yash Raj Films production, which faced calls for a boycott over its song "Besharam Rang", also stars Deepika Padukone as Rubina and John Abraham as Jim, the main antagonist.

John's first look was received with a roar. And it became even louder when Shah Rukh appeared, complete with stubble, flowing locks and fresh-from-the-battle scars to complete the rugged look. A far cry from the dimpled, clean shaven Rahul of so many other romantic films.

His first dialogue, "zinda hai" was met with loud whistles.

An action scene followed, leaving audiences holding on to their seats and erupting in loud cheers when he spoke what appeared to be a punchline popularised during the trailer of the film, online promotional videos and public appearances. "Apni kursi ke peti baandh lo, mausam bigadne wala hai (fasten your seatbelts, the weather is going to be turbulent.)

The story then follows Shah Rukh's titular spy as he goes on a globetrotting adventure to stop a terrorist group, called Outfit X, led by John's character Jim, from executing a deadly terror attack on the Indian soil.

Deepika comes in with the much discussed song "Besharam Rang", which was at the centre of a huge controversy earlier this month over the actor's outfit in the track.

The film sustained its momentum till the interval when many viewers rushed out to quickly grab their popcorn and snacks.

The following high-octane action sequence, close to six to eight minutes, saw the two superstars beat the pulp out of the bad guys atop a train, all the while they engaged in healthy banter.

The roaring and cheering reached a crescendo towards the end of the film with Shah Rukh delivering another punchline, "Party ‘Pathaan' ke ghar rakhoge, to mehmaan nawazi ke liye Pathaan to aayega and patakhe bhi layega (If you have a party at Pathaan's house, he'll surely come to greet you as a host and will also bring fireworks)." So was it all worth it, getting up at the crack of dawn on a weekday, booking a ticket well in advance, and maybe even taking leave from work?

In what should give the industry reason to hope that a revival could well be in the offing, several in the audience responded with an emphatic "yes".

"I have never watched a movie as early as 7 am but this time I made sure that I watch this film. Shah Rukh sir is coming back after 4 years and I don't want to miss this," an elated Wasim told PTI.

"It was all for Shah Rukh. I was dying to watch his film on the big screen and he didn't disappoint. However, there were many moments when John stole SRK's thunder but overall, I'm very happy with the movie," said Aparajita, a young woman.

The movie is expected to register a strong performance at the box office, a sign of cheers for Bollywood that grappled in 2022 with a string of flops.

In advance booking, "Pathaan" sold 4.19 lakh tickets till Tuesday with trade insiders predicting that the movie will raise over Rs 45 crore at the box office on the release day.