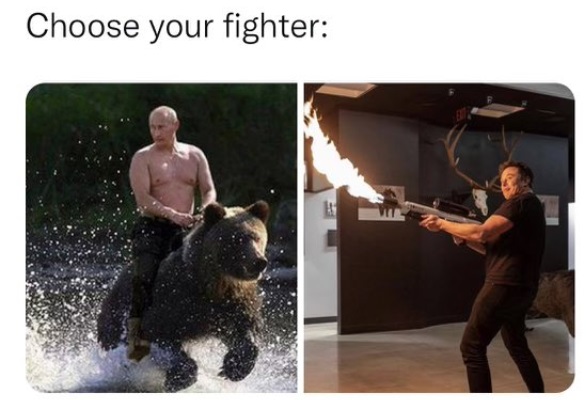 A picture shared by Elon Musk on his social media handle. Twitter/@elonmusk

In another tweet, Elon shared a picture where Putin and Elon are in fight and technology clearly has the edge:

I see you are a tough negotiator!

Ok, you can have 10% more pay per view money. pic.twitter.com/Nrbkz9IsTP

"Do you accept this fight?" he added in Russian, directly addressing the official English-language Twitter account of the 69-year-old president.

Twitter user came up with a chart measuring Musk and Putin's heights against each other.

The Twitter user wrote, "The fight would be over in 10 seconds. It would just depend on how much damage Elon would want to do and how fast. Nothing else. Elon is also 19 years younger." Musk tweeted back: "Pretty much."  Another user asked, "Did you think this through? Or am I missing something?"  Musk answered: "I am absolutely serious."

Vice president of Ukraine Mykhailo Fedorov also joined in and said that there is always the option to send Putin to Jupiter. "We can send him to Jupiter, just in case," he wrote, sharing a link where people can donate to support Ukraine's fight against Russia.

Recently, Ukrainian President Volodymyr Zelenskyy has invited Tesla Founder and CEO Elon Musk to visit his country after the war. A video of the meeting was posted on Zelenskyy's Instagram. The Russia-Ukraine war began when Russia invaded Ukraine on February 24 in what it calls a special military operation.